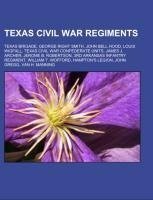 Source: Wikipedia. Pages: 31. Chapters: Texas Brigade, George Right Smith, John Bell Hood, Louis Wigfall, Texas Civil War Confederate units, James J. Archer, Jerome B. Robertson, 3rd Arkansas Infantry Regiment, William T. Wofford, Hampton's Legion, John Gregg, Van H. Manning, Terry's Texas Rangers, 18th Georgia Volunteer Infantry, William H. Tebbs, John Allen Wilcox, 1st Texas Infantry, 20th Texas Infantry, John Burke, Stephen Heard Darden, Waul's Legion. Excerpt: George Right Smith (May 1, 1837 - April 29, 1903) elevated from Private to the rank of 1st Lieutenant in the Confederate Army during the American Civil War, later farmer and notable citizen of Georgia. George grew up with his 21 brothers and sisters on his daddy's farm in Georgia. John J. Smith, his father, owned a farm on "411 highway near Mrs Rebecca Latimer Felton's at Cartersville". John, with only the help of those 22 children (most of whom did not survive to adulthood) and his wife, raised cotton, corn, hay, wheat and oats, and owned a cotton gin, and a mill to grind wheat and corn that they farmed. His place was fenced to keep in the hogs and cattle that were driven down on his place by what was known then as the Old Federal Road. As the 9th of 22 children, and with such a large place, George was one busy young man. After tensions had heightened between the north and south, and news of secession had spread, W.T. Wofford, a businessman, raised a confederate company in Cass County, Ga. (now Bartow County) northwest of Atlanta on April 10, 1861. George enlisted just before his 24th birthday into Company H of what soon became Wofford's 18th Georgia Regiment on June 13, 1861. Later they also became known as the "Rowland Highlanders." The company was assigned to the 18th Georgia Regiment on April 26, only two months before George Smith signed on. At this time, W.T. Wofford was elevated to the rank of Commissioned Colonel and given command of the regiment. Shortly thereafter, the 18th was assigned to the 4th Brigade of Georgia Volunteers and moved to Camp McDonald at Big Shanty, Ga. (now Kennesaw) for training. On July 31, 1861, just six weeks after George enlisted, a public "Grand Review" of the brigade was held in Big Shanty. This parade of the troops, in fresh uniforms and good shoes, full of fanfare and bravado was shortly followed by the 4th Brigade being assigned to the command of General W. Philips on September 9, 1861. The brigade moved to Lynchburg, Va. to