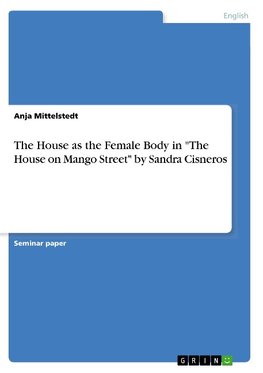 Seminar paper from the year 2018 in the subject American Studies - Literature, grade: 1.0, University of Potsdam, course: Chicana Life Writing, language: English, abstract: The title of the book "The House on Mango Street" raises expectations and creates questions of its content and intent. Will it be the story of a family in the south, where Mangos grow? Will we meet different characters who inhabit the same house one after another? Or will the house be one-of-its-kind on this special street? In actuality, Sandra Cisneros tells the story of a girl, Esperanza, who lives in a house, set on Mango Street, in a fictional part of Chicago.

The 44 vignettes have their roots in stories Cisneros heard, saw, or experienced in real life. The singular in the title should therefore be a plural, because a great number of houses feature in the book. Esperanza visits family and friends while searching for her own future. The House on Mango Street is a growing-up story, yet buildings do not grow into anything. They are falling into disrepair more often than not. So why does a house feature so prominently in the title of a book on growing up? I will argue, that the house in this book can be read as the female body in a patriarchal society. Its immobile state an accusation in the face of a need for change.

In 1984 Sandra Cisneros published The House on Mango Street and became one of the first widely read writers of the Chicana movement. A movement that filled the void left for women of Mexican heritage by the U.S. feminist movement on the one hand, and the Chicano movement on the other hand. White middle class women fought for political equality, women's suffrage, and reproduction rights; Latino males fought for equal opportunity with and recognition from the dominant white U.S. American culture. The Chicana had very little interest in political rights, since she was usually concerned with questions of laundry and cooking. She didn't want to fight for recognition from dominant culture, because she was still dominated by males of her own culture.

While the Chicana movement achieved recognition and won many battles since then, the current climate in U.S. politics, the fear of immigrants, the disregard for women's rights to their bodies, shows that there is much to be done. The House on Mango Street remains a book of utmost consequence to feminism, immigration and integration. What Sandra Cisneros captured, and I will try to show, is how the way we think about women influences the way we act toward them and how the same thoughts act on our self-perception.