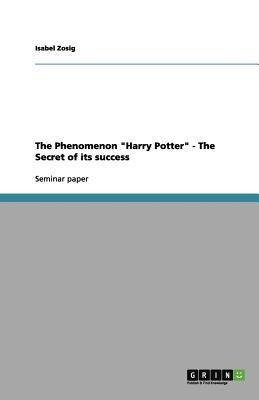 The Phenomenon "Harry Potter" - The Secret of its success

Seminar paper from the year 2003 in the subject English Language and Literature Studies - Literature, grade: 2 (B), University of Bamberg (Centre for British Studies), course: Introdution to british media and communication science, language: English, abstract: At the age of six, Joanne Kathleen Rowling2 wrote her first short story about a
rabbit named Rabbit, who had the measles and was visited by his friends. Amongst
them was a little bee called Miss Bee.
However, she never told anyone about her "burning ambition"3 to become a
writer, not even Ms Shephard, her English teacher at Wyedean Comprehensive School.
Ms Shephard was a great influence on young Joanne as "she inspired trust"4.
Shephard's comments on Harry Potter and the Philosopher's Stone "meant more to
[Joanne Rowling] than any newspaper reviews"5.
After finishing secondary school and her studies in French and Classics at Exeter
University, Joanne Rowling started to work as a research asssistant at Amnesty
International which was a "very, very interesting place to work"6, but at the same time a
huge mistake, because Joanne Rowling admits that as a secretary she would be
anybody's "worst nightmare"7.
It was during a delayed train journey from Manchester to King's Cross Station in
London, when she was obviously hit by magic. The story about a little orphan named
Harry Potter, who has to live with his old-fashioned relatives and finds out that he is a
wizard, came to her mind. And because she had no pen or notebook with her, she had to
think it. So, Hogwarts - School of Witchcraft and Wizardry came to life in her
imagination, and as she invented it, it "felt like research"8. "It was a question of
discovery why Harry was where he was, why his parents were dead"9. At the end of the
journey she knew "it was going to be a seven-book series"10. The next five years, while she moved to Portugal, got married, had a baby, got
divorced and moved back to Britain, she continued writing the first book of the series
Harry Potter and the Philosopher's Stone (HP1)11 which she finished in 1995.
2 see Picture 1
3 Lindsey Fraser, Conversations with J.K. Rowling, New York 2001, p.22.
4 ibid, p. 19.
5 ibid, p. 19.
6 ibid, p. 36.
7 ibid, p. 35.
8 ibid, p. 39.
9 ibid, p. 39.
10 ibid, pp. 39.
11 see Picture 2