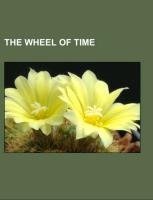 The Wheel of Time

Source: Wikipedia. Pages: 45. Chapters: Robert Jordan, One Power, Aiel, Items of the One Power, Rand al'Thor, The Wheel of Time Roleplaying Game, Shadowspawn, The Wheel of Time Collectible Card Game, Brandon Sanderson, Old Tongue, Trollocs, Unusual abilities, Damane, Aelfinn and Eelfinn, Ogier, Tuatha'an, True Power, The Kin, Balefire, Amyrlin Seat, Mashadar, Heron-mark sword, Dragonsworn, Avendesora, Tower of Ghenjei, Horn of Valere, Ta'veren, Tarmon Gai'don, Daes Dae'mar, Laman's Pride, Ogier Grove, Keeper of the Chronicles, Little Tower. Excerpt: The Wheel of Time (abbreviated by fans to WoT) is a series of epic fantasy novels written by American author James Oliver Rigney, Jr., under the pen name Robert Jordan. Originally planned as a six-book series, the length was increased by increments; at the time of Rigney's death, he expected it to be 12, but it will actually run 14. There is also a prequel novel and a companion book available. Rigney began writing the first volume, The Eye of the World, in 1984 and it was published in January 1990. The author died in 2007 while working on what was planned to be the final volume in the series, although he had prepared extensive notes so another author could complete the book according to his wishes. Fellow fantasy author and long-time Wheel of Time fan Brandon Sanderson was brought in to complete the final book, but during the writing process it was decided that book would be far too large to be published in one volume, and would instead be published as three volumes as large as, or larger than, any previous book in the series. The first volume was published in 2009 under the title The Gathering Storm. The final two books are called Towers of Midnight (released November 2, 2010) and A Memory of Light (slated for a March 2012 release). The series draws on numerous elements of both European and Asian mythology, most notably the cyclical nature of time found in Hinduism and Buddhism and the concepts of balance, duality, and a matter-of-fact respect for nature found in Daoism. It was also partly inspired by Leo Tolstoy's War and Peace. The Wheel of Time is notable for its length, its detailed imaginary world, its well-developed magic system and a large cast of characters. The eighth through thirteenth books each reached number one on the New York Times Best Seller list. As of August 12, 2008 the series has sold over 44 million copies worldwide and has spawned a computer game, roleplaying game and a soundtrack album. The television and film rights to the series have been