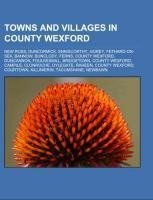 Towns and villages in County Wexford

Source: Wikipedia. Pages: 38. Chapters: New Ross, Duncormick, Enniscorthy, Gorey, Fethard-on-Sea, Bannow, Bunclody, Ferns, County Wexford, Duncannon, Foulkesmill, Bridgetown, County Wexford, Campile, Clonroche, Oylegate, Raheen, County Wexford, Courtown, Killinierin, Tacumshane, Newbawn, Rosbercon, Killurin, Rosslare Strand, Kilmuckridge, Taghmon, Castlebridge, Blackwater, County Wexford, Ballycanew, Monaseed, Curracloe, Rathnure, Inch, County Wexford, Ballywilliam, Murrintown, Kilmore, County Wexford, Kilmore Quay, Ballycullane, Rosslare Harbour, Ballyhack, County Wexford, Craanford, Adamstown, County Wexford, Crossabeg, Monamolin, Bree, County Wexford, Castletown, County Wexford, Boolavogue, Wellingtonbridge, Oulart, Saltmills, Kiltealy, Riverchapel, Coolgreany, Watch House Village, Poulpeasty, Camolin, County Wexford, Hollyfort, Cleariestown, Cullenstown, Monageer, Clogh, County Wexford, Ballycarney, Rathangan, County Wexford, Broadway, County Wexford, Ballindaggin, Scarnagh, Clohamon, Arthurstown, County Wexford, Ballygarrett, The Harrow, County Wexford, Ballyduff, County Wexford, Ballyedmond, Killanne. Excerpt: New Ross (Irish: , meaning "wood of the son of Treon", formerly Ros Mhic Treoin) is a town located in southwest County Wexford, in the southeast of Ireland. In 2006 it had a population of 7,709 people, making it the third largest town in the county after Wexford and Enniscorthy. The port town of New Ross dates from the Middle Ages. The earliest settlement in this area dates back to the 6th century when St. Abban of Magheranoidhe founded a monastery in what is now the Irishtown. The original earthen banked circular enclosure of his monastery was visible around the graveyard until about 10 years ago when it was unceremoniously removed by the council. It has been replaced by a concrete wall and steel fence. Its name, Ros, was shortened from Ros Mhic Treoin, or the Wood of the Son of Treon. Little is known of the town in pre-Norman times, except for the writings of St. Abban, who lived in the late 6th century. He founded of a monastic settlement, which lies under the present day St. Stephen's Cemetery in the Irishtown. New Ross was in the territory of Dermot McMurrough and came to prominence when the Anglo-Normans conquered the region. The Norman knight William Marshall and his bride Isabella arrived during the early part of the 13th century. An earthen defensive structure called a motte was quickly built at Old Ross in order to hold the newly conquered territory. A medieval borough sprung up around it - peopled by English and Welsh settlers. William later founded the port town down by the river, leaving the native Irish living around the monastery up the hill. Isabella was the only child of Strongbow who was married to Aoife, daughter of Dermot McMurrough, King of Leinster. The arrival of Isabella and William is described in the Chronicles of Ros, which are in the British Museum. It records that in 1189, Isabella set about "building a lovely city on the banks of the Barrow". The town's fortunes further increased when King John made William Earl of Pembroke at his coron