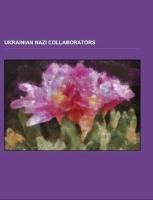 Source: Wikipedia. Pages: 31. Chapters: 14th Waffen Grenadier Division of the SS (1st Ukrainian), 201st Schutzmannschaft Battalion, 204 Schutzmannschaft Battalion, Bergbauernhilfe, Bohdan Koziy, Fedir Bohatyrchuk, Feodor Fedorenko, Ivan the Terrible (Treblinka guard), John Demjanjuk, Mykola Lebed, Nachtigall Battalion, Petro Dyachenko, Petro Zakhvalynsky, Roland Battalion, Schutzmannschaft-Brigade Siegling, Schutzmannschaft Batallion 118, Sergei Bunyachenko, The Lemberg Mosaic, Ukrainische Hilfspolizei, Vladimir Katriuk. Excerpt: John Demjanjuk (born Ivan Mykolaiovych Demianiuk; Ukrainian: ; 3 April 1920 - 17 March 2012) was a Ukrainian-American convicted for war crimes as an accessory to the murder of 27,900 Jews while acting as a guard at the Sobibor Nazi German extermination camp. Since his conviction was pending appeal at the time of his death, Demjanjuk remains presumed innocent under German law, and his earlier conviction is invalidated. According to the Munich state court, Demjanjuk does not have a criminal record. Demjanjuk was born in Ukraine, and during World War II was drafted into the Soviet Red Army, where he was captured as a German prisoner of war. In 1952 he emigrated from Germany to the United States, and was granted citizenship in 1958 whereupon he formally anglicized his name from "Ivan" to "John". In 1986 he was deported to Israel to stand trial for war crimes, after being mistakenly identified by Israeli Holocaust survivors as "Ivan the Terrible", a notorious guard at Treblinka. Demjanjuk was accused of committing murder and acts of extraordinarily savage violence against camp prisoners during 1942-43. He was convicted of having committed crimes against humanity and sentenced to death there in 1988. The verdict was overturned by the Israeli Supreme Court in 1993, based on new evidence that "Ivan the Terrible" was likely another man, Ivan Marchenko. After the trial, in September 1993, he returned to his home in Ohio. In 1998 his citizenship was restored after a United States federal appeals court ruled that prosecutors had suppressed exculpatory evidence concerning his identity. In 2001 Demjanjuk was charged again, this time on the grounds that he had, instead, served as a guard at the Sobibor and Majdanek camps in occupied Poland and at the Flossenbürg camp in Germany. Demjanjuk became again a stateless person in 2002 (until his death in 2012). His deportation was again ordered in 2005, but after exhausting his appeals in 2008 he still remained in the United States, as n