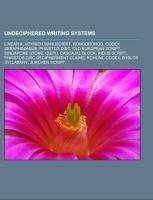 Source: Wikipedia. Pages: 61. Chapters: Linear A, Voynich manuscript, Rongorongo, Codex Seraphinianus, Phaistos Disc, Old European script, Singapore Stone, Quipu, Cascajal Block, Indus script, Phaistos Disc decipherment claims, Rohonc Codex, Byblos syllabary, Jurchen script, Khitan scripts, Proto-Sinaitic alphabet, Proto-Elamite, Liber Linteus, Tartaria tablets, Southwest Paleohispanic script, Isthmian script, Cypro-Minoan syllabary, Cretan hieroglyphs, Basarabi Cave Complex, The Starving of Saqqara, McClelland Sherd, Dispilio Tablet, Linear Elamite, Gradeshnitsa tablets, Käymäjärvi Inscriptions, Youra Potsherds, Banpo symbols, Jiahu symbols. Excerpt: Rongorongo ( ; Rapa Nui: ) is a system of glyphs discovered in the 19th century on Easter Island that appears to be writing or proto-writing. It cannot be read despite numerous attempts at decipherment. Although some calendrical and what might prove to be genealogical information has been identified, not even these glyphs can actually be read. If rongorongo does prove to be writing, it could be one of as few as three or four independent inventions of writing in human history. Two dozen wooden objects bearing rongorongo inscriptions, some heavily weathered, burned, or otherwise damaged, were collected in the late 19th century and are now scattered in museums and private collections. None remain on Easter Island. The objects are mostly tablets shaped from irregular pieces of wood, sometimes driftwood, but include a chieftain's staff, a bird-man statuette, and two reimiro ornaments. There are also a few petroglyphs which may include short rongorongo inscriptions. Oral history suggests that only a small elite was ever literate and that the tablets were sacred. Authentic rongorongo texts are written in alternating directions, a system called reverse boustrophedon. In a third of the tablets, the lines of text are inscribed in shallow fluting carved into the wood. The glyphs themselves are outlines of human, animal, plant, artifact and geometric forms. Many of the human and animal figures, such as and have characteristic protuberances on each side of the head, possibly representing ears or eyes. Individual texts are conventionally known by a single uppercase letter and a name, such as Tablet C, the Mamari Tablet. The somewhat variable names may be descriptive or indicate where the object is kept, as in the Oar, the Snuffbox, the Small Santiago Tablet, and the Santiago Staff. Rongorongo is the modern name for the inscriptions. In the Rapanui language it means "to recite, to declaim, to chant out". The original name-or perhaps description-of the script is said to have been k