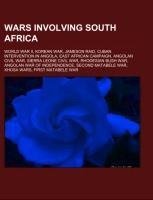 Source: Wikipedia. Pages: 143. Chapters: World War II, Korean War, Jameson Raid, Cuban intervention in Angola, East African Campaign, Angolan Civil War, Sierra Leone Civil War, Rhodesian Bush War, Angolan War of Independence, Second Matabele War, Xhosa Wars, First Matabele War, Mentioned in Despatches, Mozambican Civil War, Unholy Alliance, Namibian War of Independence, Basuto Gun War, Free State - Basotho War, South African Medal for War Services, Southern African Development Community intervention in Lesotho. Excerpt: World War I (WWI), which was predominantly called the World War or the Great War from its occurrence until 1939, and the First World War or World War I thereafter, was a major war centred in Europe that began on 28 July 1914 and lasted until 11 November 1918. It involved all the world's great powers, which were assembled in two opposing alliances: the Allies (centred around the Triple Entente) and the Central Powers (originally centred around the Triple Alliance). More than 70 million military personnel, including 60 million Europeans, were mobilised in one of the largest wars in history. More than 9 million combatants were killed, largely because of great technological advances in firepower without corresponding advances in mobility. It was the sixth deadliest conflict in world history. The assassination on 28 June 1914 of Archduke Franz Ferdinand of Austria, the heir to the throne of Austria-Hungary, was the proximate trigger of the war. Long-term causes, such as imperialistic foreign policies of the great powers of Europe, including the German Empire, the Austro-Hungarian Empire, the Ottoman Empire, the Russian Empire, the British Empire, France, and Italy, played a major role. Ferdinand's assassination by a Yugoslav nationalist resulted in a Habsburg ultimatum against the Kingdom of Serbia. Several alliances formed over the past decades were invoked, so within weeks the major powers were at war; via their colonies, the conflict soon spread around the world. On 28 July, the conflict opened with the Austro-Hungarian invasion of Serbia, followed by the German invasion of Belgium, Luxembourg and France; and a Russian attack against Germany. After the German march on Paris was brought to a halt, the Western Front settled into a static battle of attrition with a trench line that changed little until 1917. In the East, the Russian army successfully fought against the Austro-Hungarian forces but was forced back by the German army. Additional fronts opened after the Otto