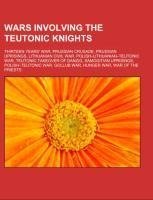 Source: Wikipedia. Pages: 35. Chapters: Thirteen Years' War, Prussian Crusade, Prussian uprisings, Lithuanian Civil War, Polish-Lithuanian-Teutonic War, Teutonic takeover of Danzig, Samogitian uprisings, Polish-Teutonic War, Gollub War, Hunger War, War of the Priests. Excerpt: The Thirteen Years' War (German: ; Polish: ), also called the War of the Cities, was a conflict that was fought in 1454-66 between the Prussian Confederation, allied with the Kingdom of Poland, and the Teutonic Order state. The war began as an uprising by Prussian cities and local nobility to win independence from the Teutonic Knights. The Prussian Confederation asked Poland's King Casimir IV Jagiellon for help and offered to incorporate Prussia into the Kingdom of Poland. When the King assented, war broke out between Poland, supporting the Prussian Confederation, and backers of government by the Teutonic Knights. The Thirteen Years' War ended in the victory of the Prussian Confederation and Poland and in the Second Peace of Thorn (1466). This was soon followed by the War of the Priests (1467-79), a drawn-out dispute with Poland over the independence of the Prussian Prince-Bishopric of Ermland (Latin: Warmia). Teutonic state in 1410In the 15th century, the towns of Prussia rapidly grew economically. However, this was not followed by an increase in their political influence. The rule of the Teutonic Knights was seen as more and more anachronistic - taxes (customs) and the system of grain licenses (every trader had to pay large fees for the privilege of trading grain) were hindering economic development in the province. At the same time the nobility wanted a larger say in the running of the country, and were looking enviously at neighbouring Poland, where the Polish nobility enjoyed wider privileges. The Knights were also accused of violating the few existing privileges of the nobility and the cities. Craftsmen were discontented because of competition from so-called partacze, or artisans settled by the Knights near their castles. Kashubians, Poles, Germans, and Prussians were slowly melting into one nation, and as national differences disappeared, the common goals of all the ethnic and social groups of Prussia became more prominent, and the Prussian estates leaned inc