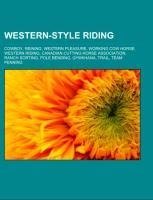 Source: Wikipedia. Pages: 26. Chapters: Cowboy, Reining, Western pleasure, Working cow horse, Western riding, Canadian Cutting Horse Association, Ranch sorting, Pole bending, Gymkhana, Trail, Team penning. Excerpt: A cowboy is an animal herder who tends cattle on ranches in North America, traditionally on horseback, and often performs a multitude of other ranch-related tasks. The historic American cowboy of the late 19th century arose from the vaquero traditions of northern Mexico and became a figure of special significance and legend. A subtype, called a wrangler, specifically tends the horses used to work cattle. In addition to ranch work, some cowboys work for or participate in rodeos. Cowgirls, first defined as such in the late 19th century, had a less-well documented historical role, but in the modern world have established the ability to work at virtually identical tasks and obtained considerable respect for their achievements. There are also cattle handlers in many other parts of the world, particularly South America and Australia, who perform work similar to the cowboy in their respective nations. The cowboy has deep historic roots tracing back to Spain and the earliest European settlers of the Americas. Over the centuries, differences in terrain, climate and the influence of cattle-handling traditions from multiple cultures created several distinct styles of equipment, clothing and animal handling. As the ever-practical cowboy adapted to the modern world, the cowboy's equipment and techniques also adapted to some degree, though many classic traditions are still preserved today. American cowboy, circa 1888The English word cowboy has an origin from several earlier terms that referred to both age and to cattle or cattle-tending work. The word "cowboy" appeared in the English language by 1725. It appears to be a direct English translation of vaquero, a Spanish word for an individual who managed cattle while mounted on horseback. It was derived from vaca, meaning "cow," which came from the Latin word vacca. Another English word for a cowboy, buckaroo, is an Anglicization of vaquero. At least one linguist has speculated that the word "buckaroo" derives from the Arabic word