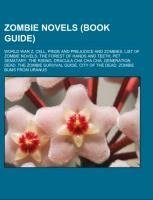 Source: Wikipedia. Commentary (novels not included). Pages: 27. Chapters: World War Z, Cell, Pride and Prejudice and Zombies, List of zombie novels, The Forest of Hands and Teeth, Pet Sematary, The Rising, Dracula Cha Cha Cha, Generation Dead, The Zombie Survival Guide, City of the Dead, Zombie Bums from Uranus, Pride and Prejudice and Zombies: Dawn of the Dreadfuls, Monster Island, Zombies: A Record of the Year of Infection, Book of the Dead, The Stupidest Angel, Death Troopers, The Jennifer Morgue, Breathers: A Zombie's Lament, Dead Sea, Monster Planet, Monster Nation, Handling the Undead, Queen Victoria: Demon Hunter, Day By Day Armageddon, Dead Heat, Return of the Living Dead, Zombistan, Bay of the Dead. Excerpt: World War Z: An Oral History of the Zombie War is a 2006 post-apocalyptic horror novel by Max Brooks. It is a follow-up to his 2003 book The Zombie Survival Guide. Rather than a grand overview or narrative, World War Z is a collection of individual accounts in the form of first-person anecdote. Brooks plays the role of an agent of the United Nations Postwar Commission who published the report a decade after the Zombie War. The United Nations left out much of his work from the official report, choosing to focus on facts and figures from the war rather than the individual stories that form the bulk of Brooks' novel. The interviews chart a decade-long war against zombies from the view point of many different people of various nationalities. The personal accounts also describe the changing religious, geo-political, and environmental aftermath of the Zombie War. World War Z was inspired by The Good War, an oral history of World War II by Studs Terkel; and by the zombie films of director George A. Romero. Brooks used World War Z to comment on social issues like government ineptitude and American isolationism, while also examining themes of survivalism and uncertainty. Critics have praised the novel for reinventing the zombie genre; the audiobook version, performed by a full cast including Alan Alda, Mark Hamill and John Turturro, won an Audie Award in 2007. A film based upon the book is in production, and is set for a December 2012 release. Brooks designed World War Z to follow the "laws" set up in The Zombie Survival Guide, and explained that the guide may exist in the world of the novel as a precursor to the Zombie War. The zombies of The Zombie Survival Guide are undead humans reanimated by an incurable virus, Solanum. They are devoid of intelligence and are motivated only by the desire to consume living flesh. The only way to destroy them is to destroy the brain, by any means. Although zombies are as strong as the humans they infected, and do not tire, they are slow m