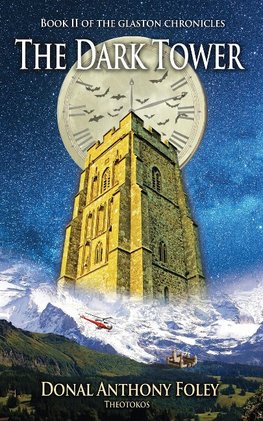 The Glaston Chronicles continue with this, the second in the series of books involving Matt Bergin and his cousins, Luke and Annie Martin. Safe back from their time-traveling exploits in Second World War France, the cousins find themselves drawn into a new... Viac o knihe

The Glaston Chronicles continue with this, the second in the series of books involving Matt Bergin and his cousins, Luke and Annie Martin. Safe back from their time-traveling exploits in Second World War France, the cousins find themselves drawn into a new adventure in the twenty-first century, but one involving their old adversary, Emil Schwarzen, who is now an aged and extremely wealthy entrepreneur styling himself as Lord Edgar Blackly.


They travel to Switzerland, to Emil's Castle, and it's strong point, the Dark Tower, a place with a troubling past, and one which the forces of evil are using again in a new and deadly way.


Matt and his cousins discover that Emil is not only rich, but also very corrupt, and they find themselves up against almost overwhelming dark forces as they undergo a terrifying final struggle with Emil and his partisans of evil.


The Dark Tower, like its predecessor, the Secret of Glaston Tor, is the story a battle between good and evil which has a fascinating plot, enthralling characters, suspense, excitement and ever-present danger.


This book is particularly meant for 12-16 year olds, but can also be read older young people, or by adults.


Commendations of The Dark Tower:


"The Dark Tower, the second book of the Glaston Chronicles series, delivers a powerful message to young people about the dangers of the occult and the real spiritual battle we face between good and evil. Donal Foley has written a thrilling adventure story that engages the reader immediately. Most profound is the story behind the story of three young people who rely on their faith, prayer and forgiveness to bring good out of evil and the redemption of one who sought to destroy them. Catholic readers will especially appreciate how these elements of the faith are the weapons that produce a victorious ending."


"The essential theme of The Dark Tower-of the spiritual war, of holiness, of the supernatural and the occult, of good and evil-is profound and, I believe, essentially true and will, I hope, help people."

We Are All Made of Molecules

The Queen of Air and Darkness

Five Children and It