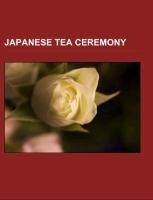 Source: Wikipedia. Pages: 45. Chapters: Chabana, Chaki, Chamei, Chashitsu, Chozubachi, Fukusa, Hanabiramochi, Iemoto, Jo-an (teahouse), Jo-ha-kyu, Kaiseki, Kama (Japanese tea ceremony), List of Japanese tea ceremony equipment, Matcha, Mizuya, Murata Juko, Mushakojisenke, Namagashi, Omotesenke, Raku ware, Roji, Schools of Japanese tea ceremony, Sen no Rikyu, Sen Soshitsu, Sen Soshu, Shibui, Tanabe Art Museum, Tetsubin, Tsukubai, Urasenke, Wabi-cha, Wabi-sabi, Wagashi, Zenga. Excerpt: The Japanese tea ceremony, also called the Way of Tea, is a Japanese cultural activity involving the ceremonial preparation and presentation of matcha, powdered green tea. In Japanese, it is called chanoyu ) or sado, chado ). The manner in which it is performed, or the art of its performance, is called otemae ). Zen Buddhism was a primary influence in the development of the tea ceremony. Much less commonly, it uses leaf tea, primarily sencha; see sencha tea ceremony, below. Tea gatherings are classified as chakai ) or chaji ). A chakai is a relatively simple course of hospitality that includes confections, thin tea usucha), and perhaps a light meal. A chaji is a much more formal gathering, usually including a full-course kaiseki meal followed by confections, thick tea koicha), and thin tea. A chaji can last up to four hours. The first documented evidence of tea in Japan dates to the 9th century, when it was taken by the Buddhist monk Eichu (¿¿) on his return from China. The entry in the Nihon Koki states that Eichu personally prepared and served sencha (unground Japanese green tea) to Emperor Saga who was on an excursion in Karasaki (in present Shiga Prefecture) in the year 815. By imperial order in the year 816, tea plantations began to be cultivated in the Kinki region of Japan. However, the interest in tea in Japan faded after this. In China, tea had already been known, according to legend, for more than a thousand years. The form of tea popular in China in Eichu's time was "cake tea" dancha)-tea compressed into a nugget in the same manner as Pu-erh. This then would be ground in a mortar, and the resulting ground tea mixed together with various other herbs and/or flavourings. The custom of drinking tea, first for medicinal, and then largely also for pleasurable reasons, was already widespread throughout China. In the early 9th century, Chinese author Lu Yu wrote The Classic of Tea, a treatise on tea focusing on its cultivation and preparation. Lu Yu's life had be