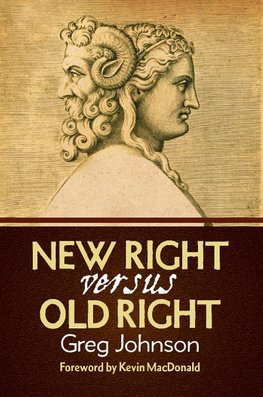 Dr. Greg Johnson is the editor of Counter-Currents Publishing and its journal North American New Right (www.counter-currents.com), which draw upon the ideas of the European New Right to promote a new approach to White Nationalist politics in North America.... Viac o knihe

Dr. Greg Johnson is the editor of Counter-Currents Publishing and its journal North American New Right (www.counter-currents.com), which draw upon the ideas of the European New Right to promote a new approach to White Nationalist politics in North America. New Right vs. Old Right collects 32 essays in which Dr. Johnson sets out his vision of White Nationalist "metapolitics" and distinguishes it from Fascism and National Socialism (the "Old Right"), as well as conservatism and classical liberalism (the "Phony Right").

Dr. Johnson rejects the Old Right's party politics, totalitarianism, imperialism, and genocide in favor of the metapolitical project of constructing a hegemonic White Nationalist consciousness within a pluralistic society. He argues that White Nationalists are too dependent on the model of hierarchical organizations and need also to work on creating resilient lateral networks. He offers New Rightist answers to a number of disputed questions within the White Nationalist community, including white culpability for our decline, Hitler and National Socialism, the Jewish question, the holocaust, the role of women, Christianity vs. paganism, and the relationships of populism, elitism, and democracy. He sets out some basic principles for creating a growing, resilient, networked movement. Finally, he criticizes distractions and dead-ends like "mainstreaming," conservatism, "premature" populism, and political violence.

"Greg Johnson's basic point is that we must work to create a metapolitics of explicit white identity-that is, a movement that will develop 'the intellectual and cultural foundations for effective White Nationalist politics in North America, so that we can ultimately create a white homeland or homelands on this continent.' Greg is one of the reasons why I think this is a feasible project. . . . Greg received his Ph.D. in philosophy, and it shows. His forte is the well-developed argument presented in a lucid, easily understood style. Nobody can complain about this book being filled with turgid prose. And I can't find any major disagreements."

-Kevin MacDonald, from the Foreword

"In New Right vs. Old Right, Greg Johnson lays out his vision for a pro-white movement more focused on ideas, education, and communication than on politics or thuggery. True to this vision, his writing is extremely accessible. Throughout this collection, Johnson breaks down complex philosophical concepts and challenging ideas into tight, efficient sentences and effective explanations. Johnson doesn't drone on trying to sound clever. Like an enthusiastic professor, he truly wants his readers to understand why he believes it is morally right for whites-and all peoples-to determine their own collective destinies."

-Jack Donovan, author of The Way of Men

"Dr. Greg Johnson's New Right vs. Old Right delineates the differences between two 'Rights,' without repudiating the common philosophical origins of both in opposing egalitarianism and other passé ideologies that continue to dominate much of the world. The primary value of this collection of essays, however, is that Dr. Johnson asks the perennial question, from our side: "what is truth?" In doing so he lays the foundations for a morality of the New Right. This book is therefore unique in the English-speaking Rightist milieu that was, for much of the post-1945 era, poorly served in comparison to its counterparts in Europe. As such, Dr. Johnson's book will be of relevance to many beyond the North American New Right, of which he is a founding father."

-Kerry Bolton, author of Artists of the Right

The State against Society