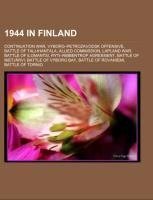 Source: Wikipedia. Pages: 32. Chapters: Continuation War, Vyborg-Petrozavodsk Offensive, Battle of Tali-Ihantala, Allied Commission, Lapland War, Battle of Ilomantsi, Ryti-Ribbentrop Agreement, Battle of Nietjärvi, Battle of Vyborg Bay, Battle of Rovaniemi, Battle of Tornio, Battle of Vuosalmi, Moscow Armistice, Evacuation of Finnish Karelia. Excerpt: The Continuation War (Finnish: , Swedish: , 25 June 1941 - 19 September 1944) was the second of two wars fought between Finland and the Soviet Union during World War II. At the time of the war, the Finnish side used the name to make clear its perceived relationship to the preceding Winter War. The Soviet Union saw the war as a part of its struggle against Germany and its allies, the Eastern Front of World War II or, as it was known in the Soviet Union, the Great Patriotic War. Germany regarded its operations in the region as a part of its overall war efforts of World War II. It provided critical material support and military cooperation to Finland. Acts of war between the two countries started on 22 June 1941, the day Germany launched its invasion of the Soviet Union. Open warfare started with a Soviet air offensive on 25 June. Subsequent Finnish operations undid its post-Winter War cessations on the Karelian Isthmus and Ladoga Karelia, and captured East Karelia by September 1941. Furthermore Finland passively participated in the siege of Leningrad for two and a half years. Accordingly the Soviet air forces bombed Helsinki and other major cities. Eventually the Soviet strategic offensive in the summer of 1944 drove the Finns from most of the territories they had gained during the war but the Finnish Army later fought it to a standstill, leading to the Moscow Armistice in September. The Paris peace treaty concluded the war formally in 1947. Finland ceded Petsamo and rented Porkkala to the Soviet Union, and paid reparations of $300,000,000 equaling half of its annual gross domestic product in 1939, while Finland retained its independence. Finnish ski troops in Northern Finland on 12 January 1940On 23 August 1939, the Soviet Union and Germany signed the Molotov-Ribbentrop Pact where parties divided the independent countries of Finland, Estonia, Latvia, Lithuania, Poland and Romania into spheres of interest, with Finland falling to the Soviet sphere of interest. Shortly