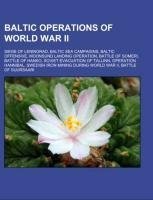 Source: Wikipedia. Pages: 25. Chapters: Siege of Leningrad, Baltic Sea campaigns, Baltic Offensive, Moonsund Landing Operation, Battle of Someri, Battle of Hanko, Soviet evacuation of Tallinn, Operation Hannibal, Swedish iron mining during World War II, Battle of Suursaari, Battle of the Danzig Bay, Operation Catherine, Oranienbaum Bridgehead. Excerpt: The Siege of Leningrad, also known as the Leningrad Blockade (Russian: , transliteration: blokada Leningrada) was a prolonged military operation resulting from the failure of the German Army Group North to capture Leningrad, now known as Saint Petersburg, in the Eastern Front theatre of World War II. It started on 8 September 1941, when the last land connection to the city was severed. Although the Soviets managed to open a narrow land corridor to the city on 18 January 1943, lifting of the siege took place on 27 January 1944, 872 days after it began. It was one of the longest and most destructive sieges in history and one of the most costly in terms of casualties. The capture of Leningrad was one of three strategic goals in the German Operation Barbarossa and the main target of the Army Group North. The strategy was motivated by Leningrad's political status as the former capital of Russia and the symbolic capital of the Russian Revolution, its military importance as a main base of the Soviet Baltic Fleet and its industrial strength, housing numerous arms factories. By 1939 the city was responsible for 11% of all Soviet industrial output. It has been reported, that Adolf Hitler was so confident of capturing Leningrad, that he had the invitations to the victory celebrations to be held in the city's Hotel Astoria already printed. The ultimate fate of the city was uncertain in German plans, ranging from renaming of the city to Adolfsburg and becoming the capital of the new Ingermanland province of the Reich in Generalplan Ost to the razing it to the ground and giving areas north of the River Neva to the Finns. Army Group North under Feldmarshal Wilhelm Ritter von Leeb advanced to Leningrad, its primary objective. Von Leeb's plan called for capturing the city on the move, but due to strong resistance from Soviet forces, and also Hitler's recall of 4th Panzer Group, he was forced to besiege the city after reaching the shores of Lake Ladoga, while trying to complete the e