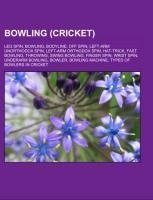 Source: Wikipedia. Pages: 51. Chapters: Leg spin, Bowling, Bodyline, Off spin, Left-arm unorthodox spin, Left-arm orthodox spin, Hat-trick, Fast bowling, Throwing, Swing bowling, Finger spin, Wrist spin, Underarm bowling, Bowler, Bowling machine, Types of bowlers in cricket, Ball of the Century, Roundarm bowling, Bowling strategy, Over, Spin bowling, Line and length, Leg theory, Seam bowling, Overarm bowling, Bowling average, Wide, Lob bowling, Off theory, Projapoti, Bowling analysis, Run-up, Right-arm. Excerpt: Bodyline, also known as fast leg theory bowling, was a cricketing tactic devised by the English cricket team for their 1932-33 Ashes tour of Australia, specifically to combat the extraordinary batting skill of Australia's Don Bradman. A bodyline delivery was one where the cricket ball was pitched short so as to rise towards the body of the batsman on the line of the leg stump, in the hope of creating leg-side deflections that could be caught by one of several fielders in the quadrant of the field behind square leg. This was considered by many to be intimidatory and physically threatening, to the point of being unfair in a game once supposed to have gentlemanly traditions, but commercialisation of the game has subsequently tended to elevate the principle of 'win at all costs' above traditional ideals of sportsmanship. Although no serious injuries arose from any short-pitched deliveries while a leg theory field was set, the tactic still led to considerable ill feeling between the two teams, with the controversy eventually spilling into the diplomatic arena. Over the next two decades, several of the Laws of Cricket were changed to prevent this tactic being repeated. Law 41.5 states At the instant of the bowler's delivery there shall not be more than two fielders, other than the wicket-keeper, behind the popping crease on the on side, commonly referred to as being "behind square leg". Additionally, Law 42.6(a) includes: The bowling of fast short pitched balls is dangerous and unfair if the umpire at the bowler's end considers that by their repetition and taking into account their length, height and direction they are likely to inflict physical injury on the striker...' The occasional short-pitched ball aimed at the batsman (a bouncer) has never been illegal and is still in widespread use as a tactic. The Australian cricket team toured England in 1930. Australia won the five-Test series 2-1, with Don Bradman scoring an astounding 974 runs at a batting average of 139.14,