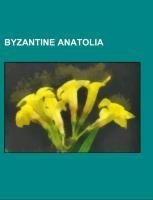 Source: Wikipedia. Pages: 25. Chapters: Abarna, Abbasid invasion of Asia Minor (782), Abbasid invasion of Asia Minor (806), Anatolic Theme, Armeniac Theme, Asia Minor Slavs, Bucellarian Theme, Byzantine Iconoclasm, Cappadocia (theme), Charsianon, Lykandos, Mesopotamia (theme), Motella, Mylasa and Melanoudion, Neokastra, Opsikion, Sagalassos, Seleucia (theme), Thracesian Theme, Tondrakians, Zenonopolis. Excerpt: The Byzantine Iconoclasm (Greek: , Eikonomachía) refers to two periods in the history of the Byzantine Empire when religious images of icons came under scrutiny by religious and imperial authorities within the Orthodox Church and the temporal imperial hierarchy. The "First Iconoclasm", as it is sometimes called, lasted between about 726 and 787. The "Second Iconoclasm" was between 814 and 842. According to the traditional view, Byzantine Iconoclasm constituted a ban on religious images by Emperor Leo III and continued under his successors, and accompanied by widespread destruction of images and persecution of supporters of the veneration of images. A major re-evaluation of the written and material evidence relating to the period of Byzantine Iconoclasm by the scholars John Haldon and Leslie Brubaker, culminating in their 2011 publication Byzantium in the Iconoclast era c. 680-850 (Cambridge University Press), has challenged each of these assumptions. Iconoclasm, Greek for "image-breaking", is the deliberate destruction within a culture of the culture's own religious icons and other symbols or monuments, usually for religious or political motives. People who engage in or support iconoclasm are called iconoclasts, a term that has come to be applied figuratively to any person who breaks or disdains established dogmata or conventions. Conversely, people who revere or venerate religious images are derisively called "iconolaters" (). They are normally known as "iconodules" (), or "iconophiles" (). These terms were, however, not a part of the Byzantine debate over images. They have been brought into common usage by modern historians (from the seventeenth century) and their application to Byzantium increased considerably in the late twentieth century. The Byzantine term for the debate over religious imagery, "iconomachy" means "struggle over images" or "image struggle". Iconoclasm has generally been motivated theologically by an Old Covenant interpretation of the Ten Comman