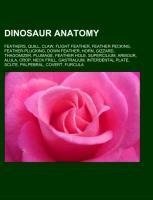 Source: Wikipedia. Pages: 42. Chapters: Feathers, Quill, Claw, Flight feather, Feather pecking, Feather-plucking, Down feather, Horn, Gizzard, Thagomizer, Plumage, Feather hole, Supercilium, Armour, Alula, Crop, Neck frill, Gastralium, Interdental plate, Scute, Palpebral, Covert, Furcula, Proximodorsal process, Coracoid tubercle, Epoccipital, Crest, Pin feather, Sclerotic ring, Osteoderm, Aigrette, Manus, Speculum feathers, Club, Pennaceous feather, Obturator process, Synsacrum, Antorbital fenestra, Pes, Predentary, Arctometatarsal, Infratemporal fenestra, Rostral bone, Hackle, Barbule, Ear tuft. Excerpt: Feathers are one of the epidermal growths that form the distinctive outer covering, or plumage, on birds and some theropod dinosaurs. They are considered the most complex integumentary structures found in vertebrates, and indeed a premier example of a complex evolutionary novelty. They are among the characteristics that distinguish the extant Aves from other living groups. Feathers have also been noticed in those Theropoda which have been termed feathered dinosaurs. Although feathers cover most parts of the body of birds, they arise only from certain well-defined tracts on the skin. They aid in flight, thermal insulation, waterproofing and coloration that helps in communication and protection. Parts of a feather:1. Vane2. Rachis3. Barb4. Afterfeather5. Hollow shaft, calamus Featherstructure of a Blue-and-yellow Macaw Budgerigar feather, magnified, showing interlocking barbulesFeathers are among the most complex integumentary appendages found in vertebrates and are formed in tiny follicles in the epidermis, or outer skin layer, that produce keratin proteins. The ß-keratins in feathers, beaks and claws - and the claws, scales and shells of reptiles - are composed of protein strands hydrogen-bonded into ß-pleated sheets, which are then further twisted and crosslinked by disulfide bridges into structures even tougher than the a-keratins of mammalian hair, horns and hoof. The exact signals that induce the growth of feathers on the skin are not known but it has been found that the transcription factor cDermo-1 induces the growth of feathers on skin and scales on the leg. Feather microstructure showing interlocking barbules. There are two basic types of feather: vaned feathers which cover the exterior of the body, and down feathers which are underneath the vaned feathers. The pennaceous feathers are vaned feathers. Also called contour feathers, pennaceous feathers arise from tracts and cover the whole body. A third rarer type of feathers, filoplumes, is hairlike and (if pr