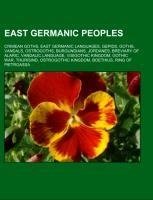 Source: Wikipedia. Pages: 89. Chapters: Crimean Goths, East Germanic languages, Gepids, Goths, Vandals, Ostrogoths, Burgundians, Jordanes, Breviary of Alaric, Vandalic language, Visigothic Kingdom, Gothic War, Thurisind, Ostrogothic Kingdom, Boethius, Ring of Pietroassa, Gothic and Vandal warfare, Ostrogothic Ravenna, Getica, Chernyakhov culture, Septimania, Oium, Thervingi, Wielbark culture, Julian, count of Ceuta, Gothic Christianity, Gotlander, Palace of Omurtag, Crimean Gothic, Ardaric, Scandza, Optimatoi, Protofeudalism, Gothiscandza, Greuthungi, Principality of Theodoro, Pietroasele, Oppas, Rosamund, List of Asturian monarchs, Turismod, Cunimund, King of the Goths, Gaut, Mangup, Amali, Mundus, Elemund, Pietroasele Treasure, Kiev culture, Scirii, Stone circle, Balti dynasty, Plinta, Reidgotaland, Hervararkviða, List of Visigothic queens, East Germanic strong verb, Burgundian language, Franziska Tesaurus, Compulsor, Grammar of the Gothic Language, Brazda lui Novac, Athanaric's Wall, John of Gothia, Code of Leovigild, Moesogoths, Greuthungi Wall, Ripa Gothica, Caucaland. Excerpt: The Visigothic Kingdom was a kingdom which occupied southwestern France and the Iberian Peninsula from the 5th to 8th century AD. One of the Germanic successor states to the Western Roman Empire, it was originally created by the settlement of the Visigoths under King Wallia in the province of Aquitaine in south-west France by the Roman government and then extended by conquest over all of the Iberian peninsula. The Kingdom maintained independence from the Eastern Roman or Byzantine Empire, the attempts of which to re-establish Roman authority in Iberia were only partially successful and short-lived. By the early 6th century, the Kingdom's territory in Gaul had been lost to the Franks, save the narrow coastal strip of Septimania, but the Visigoth control of Iberia was secured by the end of that century with the submission of the Suebi and the Basques. The ethnic distinction between the indigenous Hispano-Roman population and the Visigoths had largely disappeared by this time (the Gothic language lost its last and probably already declining function as a church language when the Visigoths converted to Catholicism in 589). Liber Iudiciorum (completed in 654) abolished the old tradition of having different laws for Romans and for Visigoths. Most of the Visigothic Kingdom was conquered by Islamic troops from Morocco in 716 AD, only the northern reaches of Spain remaining in Christian hands. These gave birth to the medieval Kingdom of Asturias when a local landlord called Pelayo, most likely of Gothic origin, was elected Princeps by the Astures. The Visigoths and their early kings were Arian Christians and came into conflict with the Catholic Church, but after they converted to Nicene Christianity, the Church exerted an enormous influence on secular affairs through the Councils of Toledo. The Visigoths also developed the most extensive secular legislation in Western Europe, the Liber Iudiciorum, which formed the basis for Spanish law throughout the Middle Ages. Visigothic