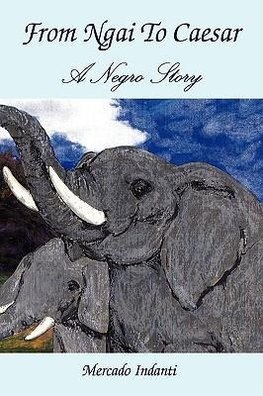 From Ngai to Caesar

From Ngai to Casaer: A Negro Story

A Layman's Guide to Scriptural Interpretation

This book tries to set forth that in our universe during ancient time there did exist an almighty God, an omni-presence... Viac o knihe

From Ngai to Casaer: A Negro Story

A Layman's Guide to Scriptural Interpretation

This book tries to set forth that in our universe during ancient time there did exist an almighty God, an omni-presence spirit and methods of communications. Those methods included the metaphysical concept, magic, and a language common to all seven continents. Continent by continent the author presents evidence found in the Hebrew, Muslim, Christian, Hindu and Buddhist histories of a language of pre-Babel times. This evidence can be in recorded history, targum, folklore, poetry, legends or in the scriptures, verse, revelations and Vedas contained in the sacred books of the Bible, Avesta, I Ching, Koran, Puranas and other vedic books. This language was also the predecessor to the African Bantu and the Asian Rong root languages that pre-dated the Semitic based languages of early Mediterranean civilizations

The author tries to give and understanding of the processes of sacred text compilation, the authorship of sacred books and the contributions of minorities, both people of color and women, to those processes. What did any ancient empire wish to include in their Book/ Law of the myths, legends, folklore and oral laws of their subject nations.
These early spiritual publishing processes of The Law or The Word involved the only literate class of the times the emperors, empresses, priestly orders, philosophers/writers, and the hierarchy of ancient political parties.

The book offers many story of Hamite, Semite and Arabic tribesmen and cities that are glean out the Old Testament books containing the patriarchal biographies and genealogies. There are also detailed the Greek myths and Hebrew folklore as in the reappearing King of Africa ( the Negus Negusti), and Moses legends. The legends can like wise be taken from the New Testament detailing the legends associate with Jesus Christ and Rabbi Akiba legends. Finally, From Ngai to Casaer: enlightens on the subjects of Resonance, Celestial and Spirit Hierarchies, and Hermeneutics.