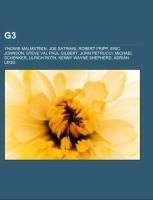 Source: Wikipedia. Pages: 34. Chapters: Yngwie Malmsteen, Joe Satriani, Robert Fripp, Eric Johnson, Steve Vai, Paul Gilbert, John Petrucci, Michael Schenker, Ulrich Roth, Kenny Wayne Shepherd, Adrian Legg. Excerpt: Steven Siro "Steve" Vai (born June 6, 1960) is a three time Grammy Award-winning American virtuoso rock guitarist, composer and producer who has sold over 15 million albums. After starting his professional career as a music transcriptionist for Frank Zappa, Vai recorded and toured in Zappa's band for two years, from 1980 to 1982. The guitarist began a solo career in 1983 and has released 8 of his own solo albums since. Apart from his work with Frank Zappa, Vai has also recorded and toured with Public Image Ltd., Alcatrazz, David Lee Roth, and Whitesnake. Vai has been a regular touring member of the G3 Concert Tour which began in 1996. In 1999 Vai started his own record label, Favored Nations, intending to showcase, as Vai describes, "...artists that have attained the highest performance level on their chosen instruments." Vai began playing guitar in 1973, at the age of 13. In 1974, he took guitar lessons from guitarist Joe Satriani, and played in numerous local bands, one of which was called "The Steve Vais." He acknowledged the influence of many guitarists including Jimi Hendrix, Jeff Beck, Brian May, Jimmy Page, Glen Buxton, and jazz fusion guitarist Allan Holdsworth. Vai followed those lessons by attending the Berklee College of Music, afterwards recording a promotional piece for them in which he spoke about auditioning for Frank Zappa at age twenty. Steve Vai (on guitar in between the drums and keyboard), Frank Zappa and band during a concert at the Memorial Auditorium, Oct 25, 1980 Buffalo, New YorkVai mailed Frank Zappa a transcription of Zappa's "The Black Page", an instrumental for drums, along with a tape with some of Vai's guitar playing. Zappa was so impressed that, in 1979, he hired him to transcribe a number of his guitar solos, including some on the Joe's Garage album and the Shut Up 'n' Play Yer Guitar series. These transcriptions were published in 1982 in The Frank Zappa Guitar Book. Subsequent to being hired as a transcriber, Vai did overdubs on man