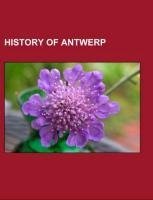 Source: Wikipedia. Pages: 45. Chapters: Union of Utrecht, Pieter Brueghel the Younger, Jan Brueghel the Elder, Jan Brueghel the Younger, Jacob Jordaens, Anthony van Dyck, Battle of the Scheldt, Guild of Saint Luke, National Reduit, Battle of Kallo, David Hendrik Chassé, Hellburners, Christophe Plantin, Siege of Antwerp, Fall of Antwerp, Philips of Marnix, Lord of Saint-Aldegonde, Tielman Susato, List of mayors of Antwerp, Plantin Press, Frans Snyders, Talleyrand partition plan for Belgium, Sack of Antwerp, Exposition Internationale d'Anvers, Guild of Romanists, French Fury, Deux-Nèthes, Finis Bellis, Battle of Oosterweel, Violieren, Lodovico Guicciardini, Souterliedekens, Silvius Brabo, Jan Moretus. Excerpt: Jacob Jordaens (19 May 1593 - 18 October 1678) was one of three Flemish Baroque painters, along with Peter Paul Rubens and Anthony van Dyck, to bring prestige to the Antwerp school of painting. Unlike those contemporaries he never traveled abroad to study Italian painting, and his career is marked by an indifference to their intellectual and courtly aspirations. In fact, except for a few short trips to locations in the Low Countries, he remained in Antwerp his entire life. As well as being a successful painter, he was a prominent designer of tapestries. Like Rubens, Jordaens painted altarpieces, mythological, and allegorical scenes, and after 1640-the year Rubens died-he was the most important painter in Antwerp for large-scale commissions and the status of his patrons increased in general. However, he is best-known today for his numerous large genre scenes based on proverbs in the manner of his contemporary Jan Brueghel the Elder, depicting The King Drinks and As the Old Sing, So Pipe the Young. Jordaens's main artistic influences, besides Rubens and the Brueghel family, were northern Italian painters such as Jacopo Bassano, Paolo Veronese, and Caravaggio. Abduction of Europe, Jacob Jordaens, 1615/16, Gemäldegalerie BerlinJacob Jordaens was born on 19 May 1593, the first of eleven children, to the wealthy linen merchant Jacob Jordaens Sr. and Barbara van Wolschaten in Antwerp. Little is known about Jordaens's early education. It can be assumed that he received the advantages of the education usually provided for children of his social class. This assumption is supported by his clear handwriting, his competence in French and in his knowledge of mythology. Jordaens familiarity with biblical subjects is evident in his many religious paintings, and his personal interaction with the Bible was strengthened by his later conversion from Catholicism to Protestantism. Like Rubens, he studied under Adam van Noort, who was his only teacher. During this time Jordaens lived in V