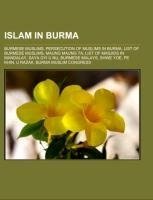 Source: Wikipedia. Pages: 26. Chapters: Burmese Muslims, Persecution of Muslims in Burma, List of Burmese Muslims, Maung Maung Ta, List of Masjids in Mandalay, Saya Gyi U Nu, Burmese Malays, Shwe Yoe, Pe Khin, U Razak, Burma Muslim Congress. Excerpt: The Bengali Sunni Jameh Mosque, built in the colonial era, is one of many mosques in Yangon.Islam is a minority religion in Burma, practiced by 4% of the population, according to the Myanmar official statistics. However, according to a U.S. State Department's 2006 international religious freedom report, official statistics underestimate the non-Buddhist population which could be as high as 30%. The first Muslims arrived in Arakan coast and upward hinterland to Maungdaw when Muhammad al-Hanafiyya, a son of Caliph Ali arrived in Arakan in 680 CE by the Bay of Bengal sea route as he and the companions left Kufa in a chaotic political environment. The tomb of Muhammad al-Hanafiyya (Muhammad Hanifa) and his wife Khaya Pari still exists in a hilltop of Maungdaw. Then Muslims arrived in Burma's Ayeyarwady River delta, on the Tanintharyi coast and in Rakhine in the 9th century, prior to the establishment of the first Burmese empire in 1055 AD by King Anawrahta of Bagan. These early Muslim settlements and the propagation of Islam were documented by Arab, Persian, European and Chinese travelers of the 9th century. Burmese Muslims are the descendants of Muslim peoples who settled and intermarried with the local Burmese ethnic groups. Muslims arrived in Burma as traders or settlers, military personnel, and prisoners of war, refugees, and as victims of slavery. However, many early Muslims also held positions of status as royal advisers, royal administrators, port authorities, mayors, and traditional medicine men. Persian Muslims arrived in northern Burma on the border with the Chinese region of Yunnan as recorded in the Chronicles of China in 860 AD. Burmese Muslims were sometimes called Pathi, a name believed to be derived from Persian. Many settlements in the southern region near present day Thailand were noted for the Muslim populations, in which Muslims often outnumbered the local Buddhists. In one record, Pathein was said to be populated with Pathis, and was ruled by three