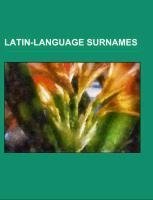 Source: Wikipedia. Pages: 24. Chapters: Apian, Avenarius, Camerarius, Cantor (surname), Clericus, Cocceius, Fabricius, Fronius, Jacobi (surname), List of Latinised names, List of Latin nicknames of the Middle Ages, List of Roman cognomina, Lorenzi, Lucci, Luci, Lucio, Lucioni, Lucius, Luzi, Mathesius, Olivarius, Petri, Pitiscus, Quintus, Rector (surname), Santori, Santoro, Serra (surname), Sylvester. Excerpt: The Latinisation of names in the vernacular was a procedure deemed necessary for the sake of conformity by scribes and authors when incorporating references to such persons in Latin texts. The procedure was used in the era of the Roman Republic and Empire. It was used continuously by the Papacy from the earliest times, in religious tracts and in diplomatic and legal documents. It was used by the early European monasteries. Following the Norman Conquest of England, it was used by the Anglo-Norman clerics and scribes when drawing up charters. Its use was revived in the Renaissance when the new learning was written down in Latin and drew much on the work of Greek, Arabic and other non-Latin ancient authors. Contemporary Italian and European scholars also needed to be Latinised to be quoted in such treatises. The different eras produced their own styles and peculiarities. Sophistication was the trademark of the Renaissance Latinisers. The Anglo-Norman scribes on the other hand were not so learned, and often simply translated the vernacular name into Latin words on the basis of similarity of sound without great reference to sense, or to the avoidance absurdity, which produced some strange results. Some notable people who have been referred to by Latinised names are: The following names consist mostly of Anglo-Norman nobles, knights, gentry and administrators and are met with frequently in 13th- & 14th-century charters, for example those published in the Calendars of the Close Rolls, Patent Rolls, Feet of Fines, etc. Also in the Testa de Nevill(Book of Fees), Cartae Baronum etc. The Latin preposition de (pronounced "day" with a long "e"), meaning "from" and reproduced in the French particule of de, requires to be followed by the ablative case. Thus Forte Scutum ("a strong shield", nominative), but de Forti Scuto (ablative), literally "from a strong shield". The example illustrates the non-sensical nature of many of the Latinisations. Pedro de CandiaGaulterio de CandiaPete