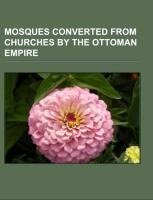 Mosques converted from churches by the Ottoman Empire

Source: Wikipedia. Pages: 45. Chapters: Mosques converted from churches in Istanbul, Hagia Sophia, Gül Mosque, Chora Church, Fenari Isa Mosque, Little Hagia Sophia, Koca Mustafa Pasha Mosque, Bodrum Mosque, Zeyrek Mosque, Eski Imaret Mosque, Kalenderhane Mosque, Arap Mosque, Atik Mustafa Pasha Mosque, Pammakaristos Church, Vefa Kilise Mosque, Sancaktar Hayrettin Mosque, Monastery of Stoudios, Kefeli Mosque, Manastir Mosque, Istanbul, Hirami Ahmet Pasha Mosque, Hagios Demetrios, Lala Mustafa Pasha Mosque, Church of the Holy Apostles, Church of the Acheiropoietos, Matthias Church, Hagia Sophia Church, Seyh Süleyman Mosque, Cathedral of Kars, Jezzar Pasha Mosque, Church of Panagia Chalkeon, Selimiye Mosque, Haydarpasha Mosque. Excerpt: Hagia Sophia (from the Greek: , "Holy Wisdom"; Latin: or Sancta Sapientia; Turkish: ) is a former Orthodox patriarchal basilica, later a mosque, and now a museum in Istanbul, Turkey. From the date of its dedication in 360 until 1453, it served as the Greek Patriarchal cathedral of Constantinople, except between 1204 and 1261, when it was converted to a Roman Catholic cathedral under the Latin Patriarch of Constantinople of the Western Crusader established Latin Empire. The building was a mosque from 29 May 1453 until 1931, when it was secularized. It was opened as a museum on 1 February 1935. The Church was dedicated to the Logos, the second person of the Holy Trinity, its dedication feast taking place on 25 December, the anniversary of the incarnation of the Logos in Christ. Although it is sometimes referred to as Sancta Sophia (as though it were named after Saint Sophia), sophia is the phonetic spelling in Latin of the Greek word for wisdom - the full name in Greek being , "Church of the Holy Wisdom of God". Famous in particular for its massive dome, it is considered the epitome of Byzantine architecture and is said to have "changed the history of architecture." It was the largest cathedral in the world for nearly a thousand years, until Seville Cathedral was completed in 1520. The current building was originally constructed as a church between 532 and 537 on the orders of the Byzantine Emperor Justinian and was the third Church of the Holy Wisdom to occupy the site, the previous two having both been destroyed by rioters. It was designed by the Greek scientists Isidore of Miletus, a physicist, and Anthemius of Tralles, a mathematician. The church contained a large collection of holy relics and featured, among other things, a 49 foot (15 m) silver iconostasis. It was the seat of the Patriarch of Constantinople and the religious focal point of the Eastern Orthodox Church for nearly one thousand years. It is the church in which Cardinal Humbert in 1054 excommunicated