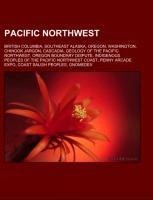 Source: Wikipedia. Pages: 91. Chapters: British Columbia, Southeast Alaska, Oregon, Washington, Chinook Jargon, Cascadia, Geology of the Pacific Northwest, Oregon boundary dispute, Indigenous peoples of the Pacific Northwest Coast, Penny Arcade Expo, Coast Salish peoples, Gnomedex, Pacific Northwest Corridor, West Coast Trail, Coast Salish languages, Science Fiction Fantasy Short Film Festival, Sakura-Con, Northwest Pinball and Gameroom Show, Hip hop music in the Pacific Northwest, Pacific Northwest Ballet, Skookum, BrickCon, 2d Or Not 2d Animation Festival, Crypticon, Battle of Woody Point, Pacific Northwest canoes, Slahal, Northwest Forest Plan, GameStorm.org, Beehive burner, Northwest Territorial Imperative, Arborglyph, Pacific lodge, PCUN. Excerpt: British Columbia (B.C. or BC) (French: , C.-B.) is the westernmost of Canada's provinces and is known for its natural beauty, as reflected in its Latin motto, Splendor sine occasu ("Splendour without Diminishment"). Its name was chosen by Queen Victoria in 1858. In 1871, it became the sixth province of Canada. The capital of British Columbia is Victoria, the fifteenth largest metropolitan region in Canada. The largest city is Vancouver, the third-largest metropolitan area in Canada, the largest in Western Canada, and the third-largest in the Pacific Northwest. In 2009, British Columbia had an estimated population of 4,419,974 (about two and a half million of whom were in Greater Vancouver). The province is currently governed by the BC Liberal Party, led by Premier Christy Clark, who became leader as a result of the party election on February 26, 2011. British Columbia's economy is largely resource-based. It is the endpoint of transcontinental highways and railways and the site of major Pacific ports, which enable international trade. Because of its mild weather, and despite the fact that less than 5% of its land is arable, the province is agriculturally rich, particularly in the Fraser and Okanagan Valleys. Its climate encourages outdoor recreation and tourism, though its economic mainstay has long been resource extraction, principally logging and mining. The province's name was chosen by Queen Victoria when the Colony of British Columbia, i.e. "the Mainland", became a British colony in 1858. It refers to the Columbia District, the British name for the territory drained by the Columbia River, which has its origins and upper reaches in southeastern British Columbia, which was the namesake of the pre-Oregon Treaty Columbia Department of the Hudson's Bay Company. Queen Victoria chose British Columbia to distinguish what was the British sector of the Columbia District from that of the United States ("American Columbia" or "Southern Columbia"), which became the Oregon Te