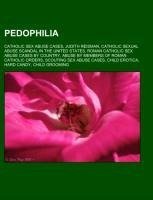 Source: Wikipedia. Pages: 53. Chapters: Catholic sex abuse cases, Judith Reisman, Catholic sexual abuse scandal in the United States, Roman Catholic sex abuse cases by country, Abuse by members of Roman Catholic orders, Scouting sex abuse cases, Child erotica, Hard Candy, Child grooming, List of books portraying sexual relations between minors and adults, Airline sex discrimination policy controversy, Dante Arthurs, Salesian College, Lolita, Chicken Hawk: Men Who Love Boys, François Houtart, A Place for Paedophiles, History of child sexuality, Jeri Massi, Avoidance, Amor Estranho Amor, Family Affair, Boy O'Boy, Teardrops on My Drum. Excerpt: The Catholic sex abuse cases are a series of ongoing investigations into allegations on and convictions for sex crimes committed by Catholic priests and members of religious orders. These cases began receiving public attention beginning in the mid-1980s. The attention led to criminal prosecutions of the abusers and to civil lawsuits against the church's dioceses and parishes where abuse was alleged to have occurred. Sexual abuse of minors in the priesthood has received significant media attention in Canada, Ireland, the United States, the United Kingdom, Mexico, Belgium, France, and Germany, while cases have been reported throughout the world. In addition to cases of actual abuse, much of the scandal has focused around members of the Catholic hierarchy who did not report abuse allegations to the civil authorities and who, in many cases, reassigned the offenders to other locations where the alleged predators continued to have contact with minors and had opportunities to continue to sexually abuse children. In defending their actions, some bishops and psychiatrists contended that the prevailing psychology of the times suggested that people could be cured of such behavior through counseling. Members of the church hierarchy have argued that media coverage has been excessive. In response to the widening scandal, Pope John Paul II emphasized the spiritual nature of the offenses as well. He declared in 2001 that "a sin against the Sixth Commandment of the Decalogue by a cleric with a minor under 18 years of age is to be considered a grave sin, or delictum gravius." With the approval of the Vatican, the hierarchy of the church in the United States said that it instituted reforms to prevent future abuse including requiring background checks for Church employees and volunteers, while opposing extensions of the statutes of limitations in sex abuse cases. Allegations on and convictions for sexual abuse by clergy has been subject to public debate in many countries (see Roman Cat

The Paradox of Choice

Can I tell you about Eating Disorders?

Harmonic Wealth: The Secret of Attracti

I Am Different from You

On Becoming a Person