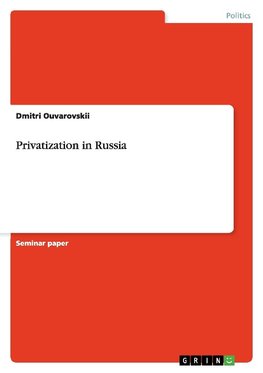 Seminar paper from the year 2007 in the subject Politics - International Politics - Region: Russia, grade: A, York University, 13 entries in the bibliography, language: English, abstract: ¿Fragmentation of state authority, lack of a clear legislative base, unreliability of the legal system, collapse of the industry, bisection of the GDP, runaway inflation, capital flight, rises in crime and corruption, tremendous decline in life expectancy: the political, economic and social results of Russia's transition from plan to market under Yeltsin are devastating. Within a few years the "mighty" Soviet Union fell back from a major power to a third world economy, dealing with problems like mass poverty and epidemics.
In light of these disastrous outcomes the question of what "went right" during the transition process seems to be even more appropriate then the question of what "went wrong". However, while it seems to be obvious that the stabilization and liberalization attempts by the Russian government predominantly failed, privatization, the third core facet of transition1 , "has been touted as a one of the major successes of the Russian government's economic transformation policy. By the beginning of 1996 77.2% of medium-size and large enterprises had been privatised, accounting for 88.3% of total industrial output."2 On the one hand, according to the Russian government's Western advisers this privatization is the fastest in
human history and "seems to be one of the few positive fruit of Russian economic policy since 1991"3. On the other hand, a common point of view is that its implementation led to an unfair distribution of state assets and only benefited a minority of Russian population. This debate is going to be the main focus of this paper. By discussing the general importance of the private sector to a democracy, the aims of privatization, its subsequent reforms, and its results, I intend to assess the contribution of these reforms to the process of Russian democratization.