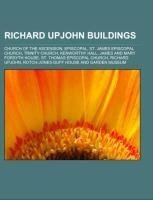 Source: Wikipedia. Pages: 28. Chapters: Church of the Ascension, Episcopal, St. James Episcopal Church, Trinity Church, Kenworthy Hall, James and Mary Forsyth House, St. Thomas Episcopal Church, Richard Upjohn, Rotch-Jones-Duff House and Garden Museum, St. Philip's Church in the Highlands, St. Peter's Episcopal Church, Church of the Holy Communion and Buildings, Church of the Holy Cross, Woodlawn, Church of the Holy Comforter, Edward King House, Kingscote, St. John's Chapel, St. Mark's Cathedral, Salt Lake City, All Saints Episcopal Church, St. Paul's Episcopal Church, Old Colony Historical Society, Zion Church, All Saint's Memorial Church, Trinity Chapel Complex, Pilgrim Congregational Church, Hamilton Hoppin House, Grace Church. Excerpt: The Church of the Ascension is an Episcopal church in the Diocese of New York, located at 36-38 Fifth Avenue and Tenth Street in the Greenwich Village neighborhood of Manhattan New York City. From an austere beginning as a bastion of the evangelical movement it has become internationally known for its art, music, and liturgy. From a church with rented pews and a mostly affluent, homogeneous congregation, it has evolved into a parish of diverse people whose economic circumstances vary widely. The church, which was built in 1840-41 and was designed by Richard Upjohn in the Gothic Revival style, with an interior remodeled by Stanford White in 1885-89, was designated a National Historic Landmark in 1987. Its parish house, at 12 West 11th Street between Fifth Avenue an the Avenue of the Americas (Sixth Avenue), was built in 1844 and was altered to its current state in 1888-89 by McKim, Mead and White in a Northern Renaissance-inspired style. Both buildings are part of the Greenwich Village Historic District, designated by the New York City Landmarks Preservation Commission in 1969. The interior of the churchAscension was founded in 1827, when New York was a city of only about two hundred thousand people. The Reverend Manton Eastburn, assistant at Christ Church, Anthony and Worth Streets, was a champion of the evangelical movement. A group of like-minded people went to the twenty-six-year-old, English-born clergyman and asked him to form a parish "to proclaim...living, personal evangelical faith." He accepted their invitation, and a certificate of incorporation was signed on October 1, 1827. The first church, a small white Greek Revival building on Canal Street, was consecrated in 1829 and, after a decade of growth for the parish, was destroyed by fire. Little time was spent in lamentation. Within a month, the vestry selected the present site on Fifth Avenue and Tenth Street for a new church, to be designed by Richard Upjohn. The new Gothic Revival building was consecrate