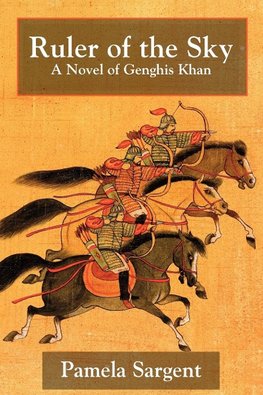 RULER OF THE SKY A NOVEL OF GE

"This formidably researched and exquisitely written novel is surely destined to be known hereafter as the definitive history of the life and times and conquests of Genghis, mightiest of Khans."
-Gary Jennings, author of Aztec

"This formidably researched and exquisitely written novel is surely destined to be known hereafter as the definitive history of the life and times and conquests of Genghis, mightiest of Khans."
-Gary Jennings, author of Aztec

"I love it...Scholarly without ever seeming pedantic, the book is fascinating from cover to cover and does admirable justice to a man who might very well be called history's single most important and compelling character."
-Elizabeth Marshall Thomas,
author of Reindeer Moon

"Sargent...has produced a neatly crafted work that manages to provide a panoramic view of the charismatic leader Genghis Khan while at the same time presenting the background mosaic of warring Mongol tribes in enough detail to keep the reader from getting hopelessly confused. A nice touch is Sargent's telling the conqueror's story from the viewpoints of the women in his life-mothers, wives, and daughters...an appealing novel to fans of historical fiction."
-Library Journal


". . .Genghis Khan lives again in this expansive saga, as perceived through the eyes of the women who loved him. 'Behind every great man...' they say; and befitting a king who in one lifetime accomplished what ten average kings might, there is more than one great woman here. Ruler of the Sky chronicles the birth, coming-of-age, reign, and death of this vastly complex warrior-king from an intimate perspective. In an age in which women were subjected to barbarous conventional practices, the courage, wisdom, tenacity, and ingenuity of these particular women are remarkable. An impressive novel from a veteran writer."
-The ALA Booklist

". . . a successful attempt to flesh out a mythic figure...Genghis Khan seen through the eyes of significant women. Ruler of the Sky will be a pleasant surprise for readers."
-Chicago Tribune


In 1167, in the harsh homeland of Mongol tribes, a child was born who was to change the course of human history. His father named him Temujin, but the world knows him as Genghis Khan. Set amid the barbaric splendor of the Mongol hordes, Ruler of the Sky tells the tale of the warrior who forged one of the greatest and most terrifying armies the world had ever seen, and conquered the world from Peking to Persia. Not only is this the story of Genghis Khan, it is also the story of those who were closest to him, especially the women who played such an important role in his life. From the windswept plains of Mongolia to the opulence of the Chinese court, Ruler of the Sky is unforgettable.

Pamela Sargent is the author of the futuristic novel The Shore of Women and the alternative history Climb the Wind: A Novel of Another America. Her other novels include Watchstar, Venus of Dreams, The Golden Space, The Alien Upstairs, and Earthseed, recently optioned by Paramount Pictures. She lives in upstate New York.