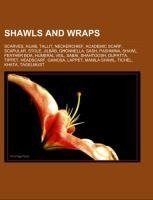 Source: Wikipedia. Pages: 42. Chapters: Scarves, Hijab, Tallit, Neckerchief, Academic scarf, Scapular, Stole, Jilbab, Ghonnella, Sash, Pashmina, Shawl, Feather boa, Humeral veil, Sabai, Shahtoosh, Dupatta, Tippet, Headscarf, Gamosa, Lappet, Manila shawl, Tichel, Khata, Tagelmust, Head tie, Shahmina, Afghan, Tudong, Krama, Haapsalu shawl, Focale, Alasho. Excerpt: The wearing of academic scarves is a tradition found at many British and Irish colleges and universities. Sets of two or more coloured stripes have traditionally been used as part of the distinctive visual identity of these institutions. The scarves are usually made of Saxony Wool and about 2 metres long. The college colours are used in clothing and symbols of all kinds, from ties to trophies, but notably in the long woollen winter scarves that students and alumni wear to show their pride in their Institutions. At Oxford, Cambridge and other universities, in addition to collegiate scarves, there are also several non-collegiate scarves which have a well-established meaning. For example, those representing the University in sport may be entitled to wear a particular scarf, depending on their level of achievement, or a university department or club may have its own scarf. In addition, some colleges and universities have (for example) separate scarves for senior clubs such as their Boat Clubs. University Arts Dentistry Divinity Engineering Law Medicine Nursing Science Social Sciences Veterinary Medicine The word "hijab" or "" (Arabic: hijaab, pronounced ~ ) refers to both the head covering traditionally worn by Muslim women and modest Muslim styles of dress in general. The Arabic word literally means curtain or cover (noun). Most Islamic legal systems define this type of modest dressing as covering everything except the face and hands in public. According to Islamic scholarship, hijab is given the wider meaning of modesty, privacy, and morality; the words for a headscarf or veil used in the Qur'an are khimar () and Jilbaab(), not hijab. Still another definition is metaphysical, where al-hijab refers to "the veil which separates man or the world from God." Muslims differ as to whether the hijab should be required on women in public, as it is in countries like Iran and Saudi Arabia; whether it should be banned in schools, as it is in France and Turkey; or whether it

Pathophysiology of Disease: An Introduction to Clinical Medicine

Cardiovascular Physiology: Questions for Self Ass