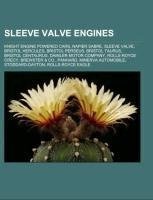 Source: Wikipedia. Pages: 39. Chapters: Knight engine powered cars, Napier Sabre, Sleeve valve, Bristol Hercules, Bristol Perseus, Bristol Taurus, Bristol Centaurus, Daimler Motor Company, Rolls-Royce Crecy, Brewster & Co., Panhard, Minerva automobile, Stoddard-Dayton, Rolls-Royce Eagle, Junk head, Pratt & Whitney X-1800, Rolls-Royce Pennine, Avions Voisin, Willys-Knight, Pratt & Whitney XH-3130, Falcon-Knight, Stearns-Knight. Excerpt: The Daimler Motor Company Limited was an independent British motor vehicle manufacturing company, founded in London by H J Lawson in 1896, which set up its manufacturing base in Coventry. That company's right to the use of the name Daimler had been purchased from Gottlieb Daimler personally together with Daimler Motoren Gesellschaft of Cannstatt, Germany. The Daimler Motor Company Limited is still registered as an active company and accounts are filed each year though it is currently marked "non-trading". The company was purchased by Jaguar Cars in 1960. After the introduction of the Daimler DR450 new models used Jaguar bodies with Daimler grilles and badging. Daimler remains in the ownership of Jaguar Cars which now belongs to Tata Group of India. Before 5 October 2007 Jaguar, while still controlled by Ford, reached agreement to permit the German company to extend its use of the name Daimler. The announcement of this agreement was delayed until the end of July 2008 and made by Jaguar's new owner, Tata. This agreement might have substantially reduced the price paid by Tata. As of 2008, Jaguar's use of the Daimler brand was limited to one model, the Daimler Super Eight. Some of the men who led "The Daimler" and some whose work gave special assistance. The name Daimler is used by two completely separate groups of car manufacturers. The history of both enterprises can be traced back to the German engineer Gottlieb Daimler who built the first four-wheeled car in 1889. This German business, initially operating at Cannstatt near Stuttgart, was the origin of the business variously known as Daimler Motoren Gesellschaft from 1890 to 1926, Daimler-Benz from 1926 to 1998, DaimlerChrysler from 1998 to 2007 and now Daimler AG or Daimler Germany, which has also manufactured vehicles since the 1890s but no cars with the name Daimler since 1908. Simms in his Motor Scout, in June 1899.The British business was begun by engineer F R Simms who was Hamburg born-and-raised though of Engl