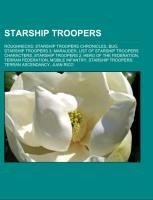 Source: Wikipedia. Pages: 34. Chapters: Roughnecks: Starship Troopers Chronicles, Bug, Starship Troopers 3: Marauder, List of Starship Troopers characters, Starship Troopers 2: Hero of the Federation, Terran Federation, Mobile Infantry, Starship Troopers: Terran Ascendancy, Juan Rico, Klendathu, Starship Troopers: The Miniatures Game, United Citizen Federation. Excerpt: Starship Troopers is a military science fiction novel by Robert A. Heinlein, first published (in abridged form) as a serial in The Magazine of Fantasy & Science Fiction (October, November 1959, as "Starship Soldier") and published hardcover in December, 1959. The first-person narrative is about a young soldier from the Philippines named Juan "Johnnie" Rico and his exploits in the Mobile Infantry, a futuristic military unit equipped with powered armor. Rico's military career progresses from recruit to non-commissioned officer and finally to officer against the backdrop of an interstellar war between mankind and an arachnoid species known as "the Bugs". Through Rico's eyes, Heinlein examines moral and philosophical aspects of suffrage, civic virtue, the necessities of war and capital punishment, and the nature of juvenile delinquency. Starship Troopers won the Hugo Award for Best Novel in 1960. The novel has attracted controversy and criticism for its social and political themes, which some critics claim promote fascism and militarism. Starship Troopers has been adapted into several films and games, with the most widely known being the 1997 film of the same name by Paul Verhoeven. Heinlein graduated from the U.S. Naval Academy in 1929, and served on active duty in the U.S. Navy for five years. He served on the then new aircraft carrier USS Lexington in 1931, and as a naval lieutenant aboard the destroyer USS Roper between 1933 and 1934, until he was forced to leave the Navy because of pulmonary tuberculosis. Heinlein never served in active combat while a Navy officer and he was a civilian during World War II doing research and development at the Philadelphia Navy Yard. Heinlein recruited Isaac Asimov to work at the Philadelphia Navy Yard with him. Heinlein's non-combat Naval service would become a point of contention in later criticism of Starship Troopers. According to Heinlein, his desire to write Starship Troopers was sparked by the publication of a newspaper adver