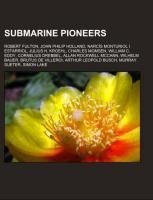 Source: Wikipedia. Pages: 27. Chapters: Robert Fulton, John Philip Holland, Narcís Monturiol i Estarriol, Julius H. Kroehl, Charles Momsen, William C. Eddy, Cornelius Drebbel, Allan Rockwell McCann, Wilhelm Bauer, Brutus de Villeroi, Arthur Leopold Busch, Murray Sueter, Simon Lake, Edmund Zalinski, Thorsten Nordenfelt, Elihu B. Frost, David Bushnell, Pacific Pearl Company, George Garrett, Isaac Peral, Maxime Laubeuf, August Howaldt, Horace Lawson Hunley, Stefan Drzewiecki, Charles A. Morris. Excerpt: Julius Hermann Kröhl (in English his name is written Kroehl) was a German-born American inventor and engineer. He built the submarine, Sub Marine Explorer, technically advanced for its era, but destined to failure, because of decompression sickness, which may not have been well understood at that time by Kroehl and others. His achievements in architecture, civil and mechanical engineering were also significant. Julius Hermann Kröhl was born 1820 in Memel, East Prussia (today Klaipeda in Lithuania). His family moved to Berlin, Kingdom of Prussia around 1828. He arrived in New York City on 29 July 1844 on board the Fairfield. While residing in New York City, he became an American citizen on 26 October 1849, formally renouncing any loyalty to the King of Prussia and taking on the duties of American citizenship. During his civilian employment with the United States Navy, he was referred to as "captain." This may indicate that he had held an officer's commission in the Prussian Army prior to his emigration, or was an officer in a volunteer militia or fire company in New York. His father was Jacob Kroehl. He was a merchant in Memel. From 1829 to 1833, the family residence was listed as Hausvogteiplatz 11, Berlin, suggesting that the family relocated to the Prussian capitol around that time. His mother, Johann Philipine Dorothea, later immigrated to the United States in 1848, but as the wife of a British merchant, John Heanes. His brother Henry (1819-1890) came to America in 1838. He had established himself as a merchant, with a business in New York City, NY, and later resided in Asbury Park, NJ, after 1870. He was a partner with Otto Dill, until he died in 1861. Henry was married to the former Cornelia Rogers Turfler. They are buried at Green-Wood Cemetery, NY. Passenger lists and passport records suggest that Henry made a few trips to Germany throughout his life. No other siblings have been identified to this article at this time. William John Kroehl (1816-1879) resided