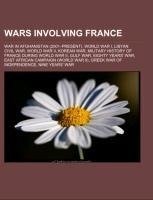 Source: Wikipedia. Pages: 220. Chapters: War in Afghanistan (2001-present), World War I, Libyan civil war, World War II, Korean War, Military history of France during World War II, Gulf War, Eighty Years' War, East African Campaign (World War II), Greek War of Independence, Nine Years' War. Excerpt: Airstrikes Insurgent attacks Massacres Other The War in Afghanistan began on 7 October 2001, as the armed forces of the United States, the United Kingdom, Australia, France, and the Afghan United Front (Northern Alliance) launched Operation Enduring Freedom. The primary driver of the invasion was the September 11 attacks on the U.S., with the stated goal of dismantling the al-Qaeda terrorist organization and ending its use of Afghanistan as a base. The U.S. also said that it would remove the Taliban regime from power and create a viable democratic state. More than a decade into the war, NATO forces continue to battle a widespread Taliban insurgency, and the war has expanded into the tribal area of neighboring Pakistan. The War in Afghanistan is also the United States' longest running war. The preludes to the war were the assassination of the Northern Alliance leader Ahmad Shah Massoud on 9 September 2001, and the September 11 attacks in the U.S., in which nearly 3,000 civilians were killed in New York City, Arlington, Virginia, and Shanksville, Pennsylvania. The U.S. identified members of al-Qaeda, an organization based in, operating out of, and allied with the Taliban's Islamic Emirate of Afghanistan, as the perpetrators of the attacks. In the first phase of Operation Enduring Freedom, ground forces of the Afghan United Front working with teams of U.S. and British Special Forces and with U.S. air support, ousted the Taliban regime from power in Kabul and most of Afghanistan in a matter of weeks. Most of the senior Taliban leadership fled to neighboring Pakistan, some being flown out in the Kunduz airlift. The democratic Islamic Republic of Afghanistan was established and an interim government under Hamid Karzai was created which was also democratically elected by the Afghan people in the 2004 general elections. The International Security Assistance Force (ISAF) was established by the U.N. Security Council at the end of December 2001 to secure Kabul and the surround