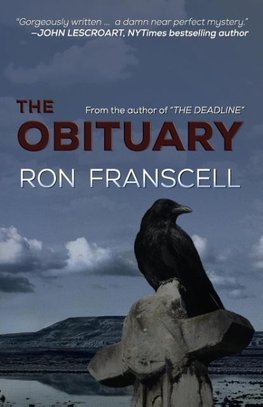 When a world-renowned forensic anthropologist journeys to Winchester, Wyoming, to examine the long-dead remains of a woman who claimed to be Etta Place - the Old West's most mysterious and legendary female outlaw - he's not expecting to find a man's headless... Viac o knihe

When a world-renowned forensic anthropologist journeys to Winchester, Wyoming, to examine the long-dead remains of a woman who claimed to be Etta Place - the Old West's most mysterious and legendary female outlaw - he's not expecting to find a man's headless corpse in her crypt. The grisly discovery plunges him and Jefferson Morgan - the editor of the weekly Winchester Bullet - into a shadowy and deadly world of satellite-savvy highway pirates, rural meth labs, computer hackers and old-fashioned corruption. And they might not survive the fall. In this sequel to his dynamic first novel, THE DEADLINE, bestselling author Franscell takes readers on another wild ride with protagonist Jefferson Morgan.

But it all happened too quickly. While the Burlington, Iowa, truck driver, a single father of four, slept in an empty interstate rest area just outside Spearfish, South Dakota, three men crept into his Peterbilt sleeper cab a little after 3 a.m. One of them, wielding a small sledge hammer, pounded a sharpened railroad spike through Pearly's eye socket into his dreaming brain. He didn't even have time to hurt.

But pain was inefficient, and these pirates were nothing if not cold-bloodedly efficient. They drove Pearly's truck west into Wyoming. Beneath a highway overpass at a dark little border town called Beulah, they dumped Pearly's still-warm body in the bed of a waiting pickup, which transported him to a secluded, lonely hole already custom-dug for him in the Wyoming prairie. Pearly would spend eternity in shallow, foreign earth far from his home and children, never found.

One hour later, right on schedule, they were met at a truck stop where three more men in rubber gloves swept the trailer for tracking devices; they found four, which were disarmed and dismantled on the spot, long before the truck or Pearly were ever missed. They also hacked into the QualComm satellite system from a laptop in their black van, and removed the tracking dish from the top of the rig. For anyone who cared, including the Feds, Pearly's stolen truck was rendered invisible from the protective satellites overhead.

And Pearly's load, a wide array of pharmaceuticals due to be dropped at a Wal-Mart warehouse in Minneapolis, Minnesota, was already sold. Broken up on the foreign and domestic black market, it would net more than three million dollars. The hijackers would eventually barter Pearly's repainted Peterbilt for a stolen rail shipment of military weapons and explosives in Mobile, Alabama. The brown stain in the sleeper was said to be spilled battery acid, but even the truth wouldn't have mattered much. In their world, battery acid was spilled everywhere.

And Pearly's four fatherless kids, their mother long dead, would be scattered by Iowa's overworked social services department to four different foster families, where they inevitably would come to hate the government for what it took from them.

All in all, it was a good night for the Fourth Sign."