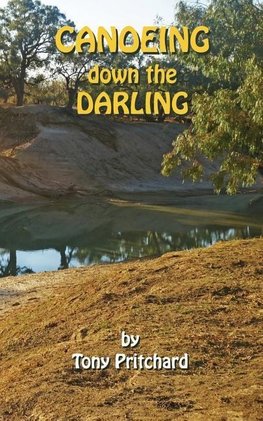 Canoeing down the Darling

After the massive success of Drifting down the Darling and Paddling down the Darling (three and four copies sold respectfully), Tony Pritchard has now thrust upon us Canoeing down the Darling. Not much has changed except for that one word, and we are once again subjected to Pritchard's chosen prose style, i.e., a combination of chaos, personal truth and the occasional wild guess. The lame jokes, however, will be far worse than previously encountered. Some are original, but most have been stolen.
Canoeing down the Darling is based on the true story of eight more trips down the Darling River between 2013 and 2017 (one is on the Macintyre, which is the upper Darling, and one is on the Paroo, which does flow into the Darling every now and again).
The story of these canoe trips is reasonably linear in a downstream fashion, but there are times when the thought patterns are not remotely linear. Think pinball machine, atoms in a gas, or insects chasing the sunlight. This manic approach is punctuated by periods of slow sentences, effortlessly slipping out of overdrive into first without crunching the grammatical gear teeth. A parsing of life's simpler parts of speech, one could say.
There are the usual discussions with wildlife (birds, turtles), the characters (hairy motor-bike riders, fellow river travellers and even some ghosts), and of course stimulating discourse on a vast range of topics, including why the Darling's water levels get low and a detailed explanation as to why Tony is way tougher than the Voyageurs ever were.
If you are a real kayaker, one who paddles eight thousand miles a day on a single breath, Pritchard's slow-coach approach to river travel may not excite you. But if you want peace and harmony on an old river then this book is for you. And for all of your extended family too. Maybe even buy some copies for the neighbours?