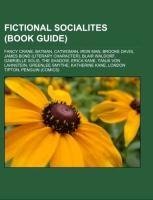 Source: Wikipedia. Pages: 176. Chapters: Fancy Crane, Batman, Catwoman, Iron Man, Brooke Davis, James Bond (literary character), Blair Waldorf, Gabrielle Solis, The Shadow, Erica Kane, Tanja von Lahnstein, Greenlee Smythe, Katherine Kane, London Tipton, Penguin (comics), Karen Walker (Will & Grace), Edward Quartermaine, Serena van der Woodsen, List of Atlas Shrugged characters, Katherine Chancellor, Wilhelmina Slater, Lionel Luthor, Angela Petrelli, Thomas Wayne, Cheetah (comics), Hush (comics), Elizabeth Swann, Victoria Lord. Excerpt: Fancy Lopez-Fitzgerald (née Crane) is a fictional character on the NBC/DirecTV soap opera Passions and is portrayed by actress Emily Harper from the May 13, 2005 episode through the series finale. Following her debut, Fancy quickly becomes one of the soap's lead heroines - Harper appears in 209 out of the 254 episodes that aired in 2006, a feat surpassed only by Lindsay Hartley (Theresa). Introduced in the May 13, 2005 episode alongside fellow Harmonyite Noah Bennett in Las Vegas, Fancy is quickly characterized as a vain, spoiled celebutante comparable to Paris Hilton and is soon revealed to be one of the frequently mentioned but heretofore unseen daughters of Julian and Ivy Crane; she is also established to be the favorite granddaughter of billionaire supervillain Alistair Crane and is later revealed to be the sole heiress to his empire. Fancy's first year of storylines is dominated by her off-and-on relationship with Noah and the conflict that it creates between herself and Alistair. With the middle-class Noah, Fancy begins her transformation from a spoiled princess into a caring, responsible young woman, but their relationship is eventually torn apart by Noah's lies and Alistair's machinations. Nursing her heartbreak in Rome, Fancy befriends her aunt's ex-fiancé, Luis Lopez-Fitzgerald, and joins him in his search for his son, and Fancy's cousin, Marty, furthering her process of maturation. Luis and Fancy eventually fall in love and become one of the program's central couples, bitterly dividing fans of the couple and those who prefer Luis with Sheridan and/or Fancy with Noah. Nonetheless, Fancy's storylines since mid-2006 center on her romance with Luis and subsequent rivalry with her aunt, Sheridan, and sister, Pretty, for his affection. Despite numerous obstacles, Luis and Fancy are married in the July 23, 2008, episode, and Fancy announces her pregnancy in the series finale. Fancy Crane was born under the sign of Capricorn (December 22-January 19) in 1980 to Ju