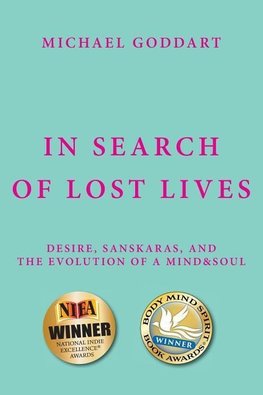 In Search of Lost Lives

Winner of the BODY MIND SPIRIT BOOK AWARD®
Winner of the NATIONAL INDIE EXCELLENCE® AWARD
In Search of Lost Lives is Michael Goddart's unique memoir in which he recovers eighty-eight past lives and depicts spiritual experiences that ultimately prepared... Viac o knihe

Winner of the BODY MIND SPIRIT BOOK AWARD®
Winner of the NATIONAL INDIE EXCELLENCE® AWARD
In Search of Lost Lives is Michael Goddart's unique memoir in which he recovers eighty-eight past lives and depicts spiritual experiences that ultimately prepared him to follow a path of soul liberation from the mind.
Unexpectedly in 2013, Michael Goddart began to recover exact, amazing details about his past lives. Recovering how his spiritual quest progressed over his most recent past lives, it became clear why in his current life in California he began his spiritual search at a young age. As life after life opened up, it also became clear how his inherent abilities and defining character traits in his current life, as well as idiosyncratic aversions and afinities and experiences of familiarity with people and places are sanskaras-that is, impressions from past lives-the result of specific experiences in particular past lives. He discovered who certain people in his current life were in former lives, including his "Cohort of Seven," the seven beings he was mainly with between lives.
Continuing to record what he recovered in his journal, lives came through from when he was an Atlantean and a Lemurian and ultimately lives when he dwelt on two other planets before Earth. He continued to recover past lives until he came to the life that was the beginning of his spiritual evolution when he was a woman with six children on his first planet.
In Search of Lost Lives: Desire, Sanskaras, and the Evolution of a Mind&Soul shows how desires and actions order transmigration to subsequent human and animal lives. Twelve lives show how hurtful actions resulted in a subsequent life as an animal or a sojourn between lives in a state of reformation. This singular account shows the spiritual experiences in numerous lives that were the many steps of his spiritual evolution that led to initiation onto a mystical path of freedom from reincarnation and reunion with God.
Read Michael Goddart's In Search of Lost Lives to:

Marvel at how women were equal and empowered on the first two other planets on which he dwelt and also at the universality of homophile lives, twelve of which he depicts in wholly different times, countries, and planets.

Learn new metaphysical terms and their different expressions, such as Notable Life, Significant Life, Overriding Desire of the higher mind, Great Love, key evolutionary experiences, the spiritual purpose of past lives, and instances when the spiritual being enhanced the human experience.

Understand who are realized Saints and Masters and what they teach; the relationship of the soul and mind; and how the negative power, a.k.a. the Devil, rules his realms of existence.

Illuminate the answers to the immortal questions of humankind: Who am I? Where am I going? What is God? What is the journey of the soul?