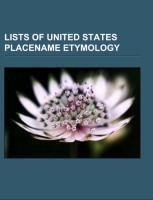 Source: Wikipedia. Pages: 37. Chapters: Toponymy of New Netherland, List of U.S. place names of French origin, List of Texas county seat name etymologies, Toponymy of Bergen, New Netherland, List of U.S. state name etymologies, List of place names in New England of aboriginal origin, Etymologies of place names in Hudson County, New Jersey, Scottish place names in the United States, List of U.S. place names of Spanish origin, Etymologies of place names in Chicago, Illinois, List of eponymous streets in New York City, Etymologies of place names in San Francisco, Etymologies of place names in Philadelphia, Pennsylvania, Etymologies of place names in Los Angeles, California, List of place names in New York of aboriginal origin, Lists of North American place name etymologies, Vlaie, List of U.S. place names connected to Sweden. Excerpt: Nieuw-Nederland, or New Netherland, was the seventeenth century colonial province of the Republic of the Seven United Netherlands on northeastern coast of North America. The claimed territory were the lands from the Delmarva Peninsula to southern Cape Cod. Settled areas are now part of the Mid-Atlantic states of New York, New Jersey, Delaware, and southwestern Connecticut. There were small outposts in Pennsylvania and Rhode Island. Its capital, New Amsterdam, was located at the southern tip of the island of Manhattan on the Upper New York Bay. The most developed part of the province roughly corresponds to today's Greater New York Metro Area. Placenames in most cases had their roots in Dutch and the Algonquian languages, and occasionally the Iroquoian Mohawk. At the time of European settlement it was the territory of the various Native American groups. In many cases the names of the Natives Americans used today were taken from the word for the place they made their villages, or their sagamore. Both the Americans and the New Netherlanders often gave names inspired by the geography or geology of the natural environment and described a shape, location, feature, quality, or phenomenon. The Lenape population, who had the most frequent contact with the New Netherlanders, were seasonally migrational groups around the New York Bay and along the Lower Hudson who became known collectively as the River Indians. Among them were the Wecquaesgeek and Siwanoy (to the north on the east side of the Hudson River); the Hackensack, Raritan, the Ramapough, and Tappan (to the west); and the Canarsee and Rockaway (on western Long Island). The Munsee inhabited the Highlands and western Hudson Valley. The Susquehannock, who lived along the Zuyd Rivier, were called the Minquas. The Mohawk, an Iroquois people, inhabited the Albany region, and the valley that now bears the name. The Mahicans, defeated by the Mohawks, retreated to the Housatonic River region soon after the arrival of the Dutch.