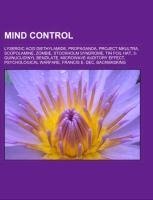 Source: Wikipedia. Pages: 102. Chapters: Lysergic acid diethylamide, Propaganda, Project MKULTRA, Scopolamine, Zombie, Stockholm syndrome, Tin foil hat, 3-Quinuclidinyl benzilate, Microwave auditory effect, Psychological warfare, Francis E. Dec, Backmasking, APA Task Force on Deceptive and Indirect Techniques of Persuasion and Control, Subliminal stimuli, Psychological manipulation, Brain implant, Sensory deprivation, Exit counseling, Sleeper effect, Candy Jones, Frank Olson, Pitesti prison, 2 + 2 = 5, Psychochemical weapon, Mind control in popular culture, White torture, Edgewood Arsenal experiments, Covert hypnosis, Gaslighting, Echo chamber, Cathy O'Brien, Rauni-Leena Luukanen-Kilde, Project MKNAOMI, Operation Dormouse, Project ARTICHOKE, Project MKDELTA, Victim playing, United States President's Commission on CIA activities within the United States, Bob Lansberry, Operation Midnight Climax, Destabilisation, Project CHATTER, Project MKOFTEN, Electronic dissolution. Excerpt: Propaganda is a form of communication that is aimed at influencing the attitude of a community toward some cause or position so as to benefit oneself. As opposed to impartially providing information, propaganda, in its most basic sense, presents information primarily to influence an audience. Propaganda often presents facts selectively (thus possibly lying by omission) to encourage a particular synthesis, or uses loaded messages to produce an emotional rather than rational response to the information presented. The desired result is a change of the attitude toward the subject in the target audience to further a political agenda. Propaganda can be used as a form of political warfare. While the term propaganda has acquired a strongly negative connotation by association with its most manipulative and jingoistic examples, propaganda in its original sense was neutral, and could refer to uses that were generally benign or innocuous, such as public health recommendations, signs encouraging citizens to participate in a census or election, or messages encouraging persons to report crimes to the police, among others. The English term is an 18th century coinage, from the Latin feminine gerund of propagare "to propagate", originally in Congregatio de Propaganda Fide "Congregation for Propagating the Faith", a committee of cardinals established in 1622 by Gregory XV. In its turn, the word propagare is related to the word propages, "a slip, a cutting of a vine" and refers to the gardener's practice to disseminate plants by planting shoots. The term is not pejorative in origin and its political sense dates back to World War I. Poster of the 19th century Scandinavist movement American recruiting poster depicting Uncle Sam Poster of Rosie the Riveter encouraging women to aid the US war effort by taking men's jobs at factories.Defining propaganda has always been a problem. The main difficulties have involved differentiating propaganda from other types of persuasion, and avoiding an "