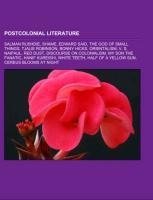 Source: Wikipedia. Pages: 65. Chapters: Salman Rushdie, Shame, Edward Said, The God of Small Things, Tjalie Robinson, Bonny Hicks, Orientalism, V. S. Naipaul, Red Dust, Discourse on colonialism, My Son the Fanatic, Hanif Kureishi, White Teeth, Half of a Yellow Sun, Cereus Blooms at Night, Noha Radwan, The Book of Salt, Wide Sargasso Sea, John Agard, Iran: A People Interrupted, A House for Mr Biswas, M.T. Mehdi, The Buddha of Suburbia, Hisham Sharabi, Moth Smoke, Shalimar the Clown, The Poisonwood Bible, The Bride Price, The Famished Road, Ornamentalism, Oscar Dathorne, The Redundancy of Courage, A Leopard Lives in a Muu Tree, The Terrorland, Heat and Dust, No Longer Our Country, Half a Life, Postcolonial Theory and the Arab-Israeli Conflict, Bart Moore-Gilbert, Sharon Maas, Magic Seeds, Angie Cruz, The Writer and the World: Essays, You Laughed and Laughed and Laughed, A Good Man in Africa, International Relations Theory and the Third World, Une Tempête, The Renegade, Piano and Drums, Release, February 1990, The Snowflakes Sail Gently Down, Once Upon a Time, Other Forms of Slaughter, Harvest of War, Black Woman, Death in the Dawn. Excerpt: Edward Wadie Saïd (Arabic pronunciation: Arabic: ¿, ; 1 November 1935 - 25 September 2003) was a Palestinian American literary theorist and advocate for Palestinian rights. He was University Professor of English and Comparative Literature at Columbia University and a founding figure in postcolonialism. Robert Fisk described him as the Palestinians' "most powerful political voice." Said was an influential cultural critic and author, known best for his book Orientalism (1978), which catapulted him to international academic fame. The book presented his influential ideas on Orientalism, the Western study of Eastern cultures. Said contended that Orientalist scholarship was and continues to be inextricably tied to the imperialist societies that produced it, making much of the work inherently politicized, servile to power, and therefore suspect. Grounding much of this thesis in his intimate knowledge of colonial literature such as the fiction of Conrad, and in the post-structuralist theory of Foucault, Derrida and others, Said's Orientalism and following works proved influential in literary theory and criticism, and continue to influence several other fields in the humanities. Orientalism affected Middle Eastern studies in particular, transforming the way practitioners of the discipline describe and examine the Middle East. Said came to discuss and vigorously debate the issue of Orientalism with scholars in the fields of history and area studies, many of whom disagreed with his thesis, including most famously Bernard Lewis. Said also came to be known as a public intellectual who frequently discussed contemporary politics, music, culture, and literature, in lectures, newspaper and magazine columns, and books. Drawing on his own experience as a Palestinian growing up in a Palestinian Christian family in the Middle East at the time of the creation of Israel, Said argued for the creation of a Palestinian state, equal rights for Palestinians in Israel, including the right of re