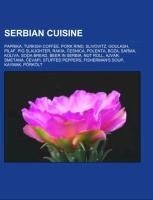 Source: Wikipedia. Pages: 62. Chapters: Paprika, Turkish coffee, Pork rind, Slivovitz, Goulash, Pilaf, Pig slaughter, Rakia, Cesnica, Polenta, Boza, Sarma, Koliva, Soda bread, Beer in Serbia, Nut roll, Ajvar, Smetana, Cevapi, Stuffed peppers, Fisherman's Soup, Kaymak, Pörkölt, Palatschinke, Kifli, Tursu, Rostiljijada, Knjaz MiloS AD, Shopska salad, Cvarci, Popara, Simit, Caciocavallo, Pihtije, Punjena paprika, Pekmez, Knedle, Kacamak, Ðuvec, Pelinkovac, Karadordeva Snicla, Yufka, Tulumba, Slatko, Pogaca, Krafne, Gibanica, Pindur, Roasted piglet, Snow White salad, Pasulj, Proja, Yaprak, Urnebes, KruSkovac, UStipci, Muckalica, Sremski Sir, Sremska kobasica, Tufahije, Djevrek, Serbian salad, Podvarak, Komovica, Crepulja. Excerpt: Turkish coffee is a method of preparing coffee in which finely powdered roast coffee beans are boiled in a pot (cezve), optionally with sugar, before being served into a cup where the dregs settle. This method of serving coffee is common throughout the Middle East, North Africa, Caucasus, and the Balkans. While the word coffee itself is driven from Arabic (Qahwah ¿¿¿¿¿), the coffeehouse culture was highly developed in the former Ottoman world, and this was the dominant style of preparation. Coffee has its origins in Ethiopia and Yemen as well as the South Western parts of Saudi Arabia The word coffee in every language is derived directly or indirectly from the Arabic word ( Qahwah ¿¿¿¿¿). By the late 15th and early 16th century, it had spread to Cairo and Mecca. The Ottoman chronicler Ibrahim Peçevi reports the opening of the first coffeehouse in Istanbul: Various legends involving its introduction at a "Kiva Han" in 1475 are reported on web sites, but with no documentation. Coffee has affected Turkish culture so much that the Turkish word for breakfast, kahvalti literally means "before coffee" (kahve means "coffee" and alti "under"), while the Turkish word for brown is kahverengi, literally meaning "the color of coffee". In recent times, Turkish coffee has become less popular than tea (which was grown locally, and could be bought without hard currency), instant coffee, and other modern styles of coffee. At the same time, it is served by international coffee chains such as Starbucks and Gloria Jean's Coffees in their stores located in Turkey, although it remains as an option, not a promoted beverage. Another cultural importance of Turkish coffee is that it is one of the most important elements of matrimonial customs. As a matrimonial prologue the prospective groom's family has to visit the prospective bride's family to ask their permission and blessings for the marriage. During this meeting the prospective bride has to prepare and serve Turkish coffee to the guests.

We will resist- Hopi und Navajo