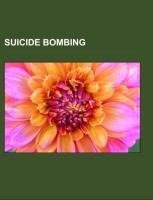 Source: Wikipedia. Pages: 45. Chapters: 2002 Bali bombings, USS Cole bombing, Myyrmanni bombing, Suicide attack, 2005 Bali bombings, 2003 Marriott Hotel bombing, 2005 University of Oklahoma bombing, Sea Tigers, Dying to Win: The Strategic Logic of Suicide Terrorism, 1983 United States embassy bombing, Revolutionary People's Liberation Party-Front, 2009 Nazran bombing, Poe Elementary School attack, Defend Your Castle, Attack on the Israeli embassy in Buenos Aires, 1994 Baku Metro bombings, Muhammad bin Nayef, Continental Airlines Flight 11, Leonidas Squadron, 2001 shoe bomb plot, 2007 Ankara bombing, 2009 Nouakchott suicide bombing, 2008 Issers bombing, September 15 2006 Yemen attacks, Shaykh Abdur Rahman, Muhammad Ahmad Hussein, MV Uhana. Excerpt: A suicide attack (which may include suicide bombings) is a type of attack in which the attacker expects or intends to die in the process. In the late 17th century Qing official Yu Yonghe recorded that injured Dutch soldiers fighting against Koxinga's forces for control of Taiwan in 1661 would use gunpowder to blow up both themselves and their opponents rather than be taken prisoner. However, the Chinese observer may have confused such suicidal tactics with the standard Dutch military practice of undermining and blowing up positions recently overrun by the enemy which almost cost Koxinga his life during the siege. During the Belgian Revolution, Dutch Lieutenant Jan van Speijk detonated his own ship in the harbour of Antwerp to prevent its capture by the Belgians. Another example was the Prussian soldier Karl Klinke on 18 April 1864 at the Battle of Dybbøl, who died blowing a hole in a Danish fortification. In the 18th century John Paul Jones wrote about Ottoman sailors setting their own ships on fire and ramming the ships of their enemies, although they knew this meant certain death for them. Modern suicide bombing as a political tool can be traced back to the assassination of Tsar Alexander II of Russia in 1881. Alexander fell victim to a Nihilist plot. While driving on one of the central streets of Saint Petersburg, near the Winter Palace, he was mortally wounded by the explosion of hand-made grenades and died a few hours afterwards. The Tsar was killed by a member of Narodnaya Volya, Ignacy Hryniewiecki, who died while intentionally exploding the bomb during the attack. Rudolf Christoph Freiherr von Gersdorff intended to assassinate Adolf Hitler by suicide bomb in 1943, but was unable to complete the attack. During the Battle for Berlin the Luftwaffe flew Selbstopfereinsatz against Soviet bridges over the Oder river. These missions were flown by pilots of the Leonidas Squadron under the command of Lieutenant Colonel Heiner Lange. From 17 April until 20 April 1945,