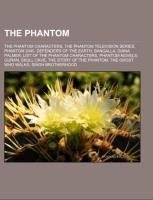 Source: Wikipedia. Pages: 30. Chapters: The Phantom characters, The Phantom television series, Phantom 2040, Defenders of the Earth, Bangalla, Diana Palmer, List of The Phantom characters, Phantom novels, Guran, Skull Cave, The Story of the Phantom: The Ghost Who Walks, Singh Brotherhood, Kari Leppänen. Excerpt: The Phantom is an American adventure comic strip created by Lee Falk, also creator of Mandrake the Magician. A popular feature adapted into many media, including television, film and video games, it stars a costumed crimefighter operating from the fictional African country Bengalla. The Phantom is the 21 in a line of crimefighters that originated in 1536, when the father of British sailor Christopher Walker was killed during a pirate attack. Swearing an oath to fight evil on the skull of his father's murderer, Christopher started the legacy of the Phantom that would be passed from father to son, leaving people to give the mysterious figure nicknames such as "The Ghost Who Walks", The Man Who Cannot Die and Guardian of the Eastern Dark, believing him to be immortal. Unlike many fictional costumed heroes, the Phantom does not have supernatural powers of any kind, but relies on his strength, intellect and fearsome reputation of being an immortal ghost to defeat his opponents. The twenty-first Phantom is married to Diana Palmer, whom he met as a child while studying in the United States, and the couple have two children together, Kit and Heloise. Like all previous Phantoms he lives in the ancient Skull Cave, and also has a trained wolf, Devil, and the horse Hero. The series began with a daily newspaper strip on February 17, 1936, followed by a color Sunday strip on May 28, 1939; both are still running as of 2011. At the peak of its popularity, the strip was read by over one hundred million people each day. Lee Falk continued work on The Phantom until his death in 1999. Today the comic strip is produced by writer Tony DePaul and artist Paul Ryan. Previous artists on the newspaper strip include Ray Moore, Wilson McCoy, Bill Lignante, Sy Barry, George Olesen, Keith Williams, Fred Fredericks, and Graham Nolan. New Phantom stories are also published in comic books in different parts of the world, among them by Dynamite Entertainment in USA; Egmont in Sweden, Norway and Finla