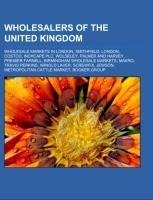 Wholesalers of the United Kingdom

Source: Wikipedia. Pages: 29. Chapters: Wholesale markets in London, Smithfield, London, Costco, Inchcape plc, Wolseley, Palmer and Harvey, Premier Farnell, Birmingham Wholesale Markets, Makro, Travis Perkins, Arnold Laver, Screwfix, Jewson, Metropolitan Cattle Market, Booker Group, BSS Group, Suma, Billingsgate Fish Market, Connect Distribution, Ironmongerydirect, Widget UK, New Covent Garden Market, Bertram Books, Beers Timber & Building Supplies, Headlam Group, Buildbase, New Spitalfields Market, Adini, CPC, City of London market constabularies, The Big Food Group, Cook, Son & Co., Gardners Books, Western International Market. Excerpt: Smithfield (also known as West Smithfield) is an area of the City of London, in the ward of Farringdon Without. It is located in the north-west part of the City, and is mostly known for its centuries-old meat market, today the last surviving historical wholesale market in Central London. Smithfield has a bloody history of executions of heretics and political opponents, including major historical figures such as Scottish patriot William Wallace, Wat Tyler, the leader of the Peasants' Revolt, and a long series of religious reformers and dissenters. Today, the Smithfield area is dominated by the imposing, Grade II listed covered market designed by Victorian architect Sir Horace Jones in the second half of the 19th century. Some of the original market buildings were abandoned for decades and faced a threat of demolition, but they were saved as the result of a public inquiry and will be part of new urban development plans aimed at preserving the historical identity of this area. West Smithfield in 1827, from John Greenwood's map of LondonIn the Middle Ages Smithfield was a broad grassy space known as Smooth Field, just outside the London Wall, on the eastern bank of the River Fleet. Due to its access to grazing and water, it was used as the City's main livestock market for nearly 1000 years. Many toponyms in the area are associated to the trading of livestock: while some of these street names (such as "Cow Cross Street" and "Cock Lane") are still in use, many more (such as "Chick Lane", "Duck Lane", "Cow Lane", "Pheasant Court", "Goose Alley") have disappeared from the maps since the major Victorian redevelopment of the area. In 1123, the land closest to Aldersgate was granted for the foundation of St Bartholomew's Priory by Rahere; as thanks for surviving an illness. The Priory enclosed the land between Aldersgate (to the east), Long Lane (in the north) and the modern Newgate Street (to the south). The main western gate opened on Smithfield; and there was a postern to L