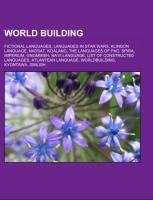 Source: Wikipedia. Pages: 63. Chapters: Fictional languages, Languages in Star Wars, Klingon language, Nadsat, Koalang, The Languages of Pao, Spira, Imperium, Gnommish, Na'vi language, List of constructed languages, Atlantean language, Worldbuilding, Kyontawa, Simlish, List of Newspeak words, Andalite terminology, Mangani, Láadan, Dothraki language, Old Tongue, Syldavian, Pravic, Tsolyáni language, Prlwytzkofsky, Ascian language, Baronh, Utopian language, Lapine language, Chakobsa, High Speech, Ku, Interlac, Elvish languages, Bordurian, Ptydepe, Word of Thoth, Strine, The Speech, Aklo, Speedtalk, Iotic, Galach, Chorukor, Eloi language, Starsza Mowa, Constructed culture. Excerpt: The fictional events of the Square Enix role-playing video games Final Fantasy X and Final Fantasy X-2 take place in a world called "Spira" Supira). As befits its name, Spira is characterized by cycles and repetition, such as the spiral of death that the world endures, the many spheres found in Spira, the Blitzball sphere pools, the prayer to Yevon, the Sphere Grid, and Spira's cycle of life energy emerging from within the planet's core, granting life to all its living inhabitants, and then returning to the core when a life form dies. As an invention of Square Enix, Spira is one of the first Final Fantasy worlds to feature consistent, all-encompassing spiritual and mythological influences within the planet's civilizations and their inhabitants' daily lives. The world of Spira itself is very different from the mainly European-style worlds found in previous Final Fantasy games, being much more closely modeled on southeast Asia, most notably with respect to its vegetation, topography and architecture. For Zanarkand, the Uzbek city of Samarkand has been cited as an inspiration. In speaking about the inspiration behind Spira, producer Yoshinori Kitase recounted that players had found fault with the sci-fi atmosphere of Final Fantasy VII and Final Fantasy VIII, instead desiring a "simple fantasy world". To Kitase, the word "fantasy" did not indicate a purely medieval-European setting, so he intentionally set out with the objective of redefining the stereotype held in players' minds. Conveniently, character designer Tetsuya Nomura had expressed an interest in designing a world with a dominantly Asian theme, and thus, the world of Spira was born in the minds of its creators. For his part, Nomura identified the South Pacific, Thailand, and Japan as major influences on the cultural and geographic design of Spira, particularly in regard to the geographic locations of Besaid and Kilika. He has also said that Spira deviates from the worlds of past Final Fantasy games most notabl