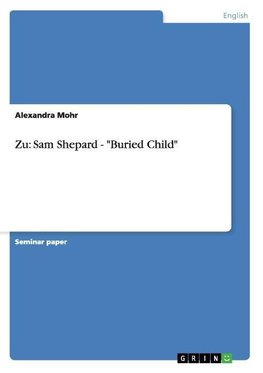 Seminar paper from the year 2000 in the subject American Studies - Literature, grade: 2,0 (B), Humboldt-University of Berlin (American Culture Studies), course: The American Dream, 7 entries in the bibliography, language: English, abstract: Sam Shepard is known as one of the most accomplished playwrights in the United States, he also gained celebrity as an actor in a couple of American movies.
He has written more than 45 plays, different screenplays, and has received 11 Obie Awards, besides a Golden Palm Award and an Oscar nomination.
For the 1979 published play Buried Child he received the Pulitzer Price in the same year. This play belongs to Shepard's trilogy of family dramas, and is probably the one which marks the change of direction in his career to a more realistic style.
Critics do recognize a lot of differences compared to older plays, which are seen as surrealistic plays, or plays, which critics catogorize as parts of the Theatre of Absurd, like, for example, Fool for Love.
But reading Buried Child, the reader quickly realizes that the play may have started as a realistic play, but it turns out to be totally different. Step by step, Shepard creates a sarcastic play, which also could be seen as part of the Theatre of Absurd.
The play is about a farmers family living near Illinois, in the middle of nowhere. On the surface the family seems to be normal, maybe just a bit frustrated. But in the background appears to be a secret, which connects the family in a very strange way, also every single member of the family tries to keep this secret.
In a brilliant way, Shepard here combines the actual with the fictional. When the audience just starts to feel comfortable with the play, the plot changes immediately and disappoints their great expectations.
The following essay is divided into three main parts. The first part will give an idea of Shepard's use of autobiographical facts, the second focuses on the father-son conflict we often find in his plays. The last part 'The Buried Child' will be a direct interpretation of the text.