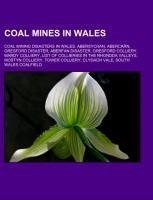 Source: Wikipedia. Pages: 33. Chapters: Coal mining disasters in Wales, Abersychan, Abercarn, Gresford disaster, Aberfan disaster, Gresford Colliery, Mardy Colliery, List of collieries in the Rhondda Valleys, Mostyn Colliery, Tower Colliery, Clydach Vale, South Wales Coalfield, Bedwas Navigation Colliery, Ffos-y-fran, Cefn Coed Colliery Museum, Wattstown, Ferndale, Rhondda Cynon Taf, Six Bells Colliery, Point of Ayr, Lady Windsor Colliery, Penallta Colliery, Big Pit National Coal Museum, Penygraig, Albion Colliery, Nantgarw Colliery, Senghenydd Colliery Disaster, Pentremawr Colliery, Abercynon Colliery, Cynheidre Colliery, Park Slip colliery, Oakdale Colliery, Cymmer, Rhondda Cynon Taf, Cambrian Colliery, Universal Colliery, Nine Mile Point Colliery, Aberpergwm, Llancaiach Colliery, Wyllie Colliery. Excerpt: The Gresford Disaster was one of Britain's worst coal mining disasters and mining accidents. It occurred on September 22, 1934 at Gresford Colliery near Wrexham, in north-east Wales, when 266 men died. Only eleven bodies were ever recovered from the mine. Work began sinking the pit at Gresford in 1908 by the United Westminster & Wrexham Collieries. Two shafts were sunk, the Dennis (named after the pit's owners, the industrialist Dennis family of Ruabon) and the Martin, which were 50 yards (46 m) apart. Work was completed in 1911; the mine was one of the deepest in the Denbighshire coalfield with the Dennis shaft reaching a depth of about 2,264 feet (690 m) and the Martin shaft about 2,252 feet (686 m). By 1934, 2,200 coal miners were employed at the colliery, with 1,850 working underground and 350 on the surface. Three seams were worked at Gresford, the Crank, Brassey, and Main seams. The accident would occur in the Dennis section of the Main seam. The Dennis section was itself divided into six "districts": the 20's, 61's, 109's, 14's and 29's districts, along with a very deep district known as "95's and 24's". All these districts were worked by the longwall system. 20's and 61's, which were furthest from the shaft, were still worked by hand, while the remaining districts were mechanised. Prior to the accident, it had been noted that ventilation in some districts was possibly inadequate: in particular, it was noted that 14's and 29's districts were poorly ventilated. It was also stated, in the report after the accident, that the main return airway for the 109's, 14's and 29's districts was far too small at 4 feet by 4 (according to one witness). Evidence was given that 95's and 24's district, at 2,600 feet deep, was uncomfortably hot. There were also numerous breaches of regulations regarding the firing of explosive charges in 14's district, taking of dust samples, and other matters. The colliery had made an operating loss in 1933, and the pit manager, William Bonsa